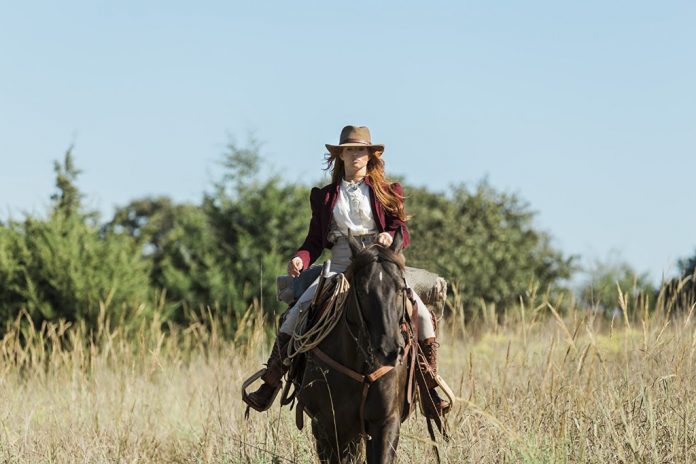 Manchester Film Festival kicks off this Thursday with an all new festival hub, and a raft of celebrity guests!

The film starring The Hunger Games’ Stef Dawson is adapted from prolific western novelist Dusty Richards’ ‘Mustanger and the Lady’, and tells the story of Julie Richards, passed from hand to hand in a web of abuse and prostitution. As Julie’s time with her benefactor is coming to a dangerous close, she is given two chances of escape with two very different men.

The multi layered female led western will kick off a great extended weekend of independent film from around the world  and from 6.30pm the Odeon Great Northern will be transformed into the festival hub space with LIVE musical performances from US Soul DJ Johnny Starke and folk artists Jerry Haanan and Sean Hartofilis.

The opening event will also welcome cast, crew and director James Cotton to Manchester where they will present Painted Woman and field questions from the Live audience, before an opening night after party in association with Almost Famous and Brooklyn Beer at the official Arighi Bianchi Filmmaker Lounge.

Jonathan Rhys Meyers, had now confirmed his attendance at the festival. Jonathan is promoting his latest film, the last film of the late great Sir John Hurt, Damascus Cover which plays on Saturday the 3rd of March at 7:45pm. Jonathan will be staying after the film to take part in a Q and A with Director Daniel Berk.

The Manchester film festival in partnership with Chief TV, will also host domestic talent with local connections such as Rochdale’s very own Jane Horrocks, Manchester’s Nico Mirallegro and Denise Welch will all be present and gracing the red carpet to represent their film’s Talking With Angels, Come Out of the Woods and Backed Eyed Susan Respectively.

The festival is not just about films but also about making friends and having fun! This year they are taking over the whole lower floor of the Odeon and we’ll be creating an amazing festival hub that is open to everyone. There will be spectacular coffee, live music, virtual reality, a VIP Filmmaker lounge, a fully stocked bar and amazing after-parties!

It also presents a brand new strand of FREE VR content. We are excited to welcome the genius of EON Reality to our Festival. EON has a vision to propel human intelligence to new levels, through empowering people with the technology of AI, IoT, AR and VR! EON will provide the platform for a new wave of intrepid film makers, displaying the virtual world for our guests and film fans alike.

As well as the festivals official VR selection EON with be demonstrating their series of hard-hitting VR films to raise awareness about the importance of safety around railway lines.

Cinema at a glance: Dunkirk