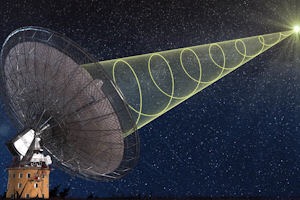 A team of astronomers at Jodrell Bank, using twelve telescopes from around the world, and in space, have for the first time captured a ‘fast radio burst’ happening live.

The achievement will help scientists trap more bursts in the future, which could offer insight into the evolution of the universe.

University of Manchester academics working from Jodrell Bank were members of the team, led by Emily Petroff from the Swinburne University of Technology in Melbourne, Australia, that captured the burst using the Parkes radio telescope located in eastern Australia.

Fast radio bursts are short, sharp flashes of radio waves from an as yet unknown source. It is not known what causes them but one possibility is they are from a dying star.

This finding brings us a step closer to understanding the phenomenon, which astronomers worldwide are vying to explain.

The finding is published today in a paper in Monthly Notices of the Royal Astronomical Society.

Lasting only milliseconds, the first such radio burst was discovered in 2007 by astronomers combing the Parkes data archive for unrelated objects. Six more bursts, apparently from outside our Galaxy, have now been found with Parkes and a seventh with the Arecibo telescope in Puerto Rico.

Professor Ben Stappers, from the University of Manchester, said: “

“Capturing this burst of radio waves in close to real time is important because it is one of the best ways we can pinpoint exactly where they come from. The rapid identification allows observations at other wavelengths where the phenomena may last longer and thus enable a more accurate location to be determined and thus a possible host galaxy. “

“Fast Radio Bursts were controversial when they were first discovered and it is only in the last few years that their existence has been more widely acknowledged. There are likely to be dozens of them hitting earth every day and if we know their locations and distances they can be used as beacons to study the material between the galaxies, a key element in understanding the make up of the Universe.”

Life for a life to branch into Clowes Park