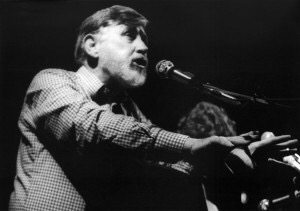 This Sunday is the one hundredth anniversary of Salford’s own Ewan Maccoll, whose Song Dirty Old Town would immortalize the city.

Born James Henry Miller on January 25 1915, in Lower Broughton, his father William was an iron-moulder, militant trade-unionist and communist who had left his native Stirlingshire in his mid-twenties. His mother, Betsy Hendry, hailed from Auchterarder, Perthshire.

He was brought up in the slums of Coburg Street, his father unable to work for being blacklisted as a left wing agitator, his mother would work as a cleaner, getting up in the early hours of the morning to clean offices and cleaning people’s houses during the day including that of Mrs Marks of Marks and Spencer fame.

Political discussion was rife in the Miller household and the young James would often accompanied his father to political meetings.He would hear the Scottish ballads from his parents and encouraged by his father would read books vociferously.

He left school at fourteen at the height of the 1930’s depression, without any qualifications, he struggled to find work, instead he would inhabit Salford public library.

He joined the Young Communist league, encouraged by a lodger that his parents had taken in as well as a radical theatre group.His activities would come to the attention of the local police.

In 1931, ten thousand people would march on the council offices at Bexley Square protesting against cuts in unemployment benefit.Jimmy, as he was known, was involved in the fringes with his theatre company, Theatre of Action which would perform worker based plays.

The theatre would lead him to meeting his first wife, Joan Littlewood, a young actress just up from the Royal Academy of Dramatic Arts. Together they set up a workers’ experimental theatre in Manchester, the Theatre of Action.

Both were still being watched by the authorities for their communist leanings and shortly after the outbreak of the Second World War, one of their plays was stopped and both were arrested and banned from performing for two years.

Called up, he absconded from the army and would disappear turning up in 1945, under a new name Ewan McColl, engrained Lallans movement, poets of the 19th century who attempted to create a standard Scots language and literature to preserve their identity in the face of English dominance.

He would be reunited with Joan Littlewood, although they would divorce in 1949, and they would form Theatre Workshop. It was his most prolific period of theatre writing, eleven plays and gaining the accolade of George Bernard Shaw who quipped that other than himself, MacColl was the best living playwright in Britain.

But he would give up the theatre and refine himself in the 1950’s as a folk singer and would play a key role in the folk revival.

In 1957, collaborating with Peggy Seeger and Charles Parker, he wrote a series of musical documentaries for BBC radio which came to be known as The Radio Ballads. These were a combination of recorded speech, sound effects, new songs and folk instrumentation and they were hailed as a major breakthrough in creative radio technique.

He would write over three hundred songs, his best known, The First Time Ever I Saw Your Face, Dirty Old Town, The Shoals of Herring, Freeborn Man, The Manchester Rambler and The Joy of Living and would father five children with two further women, Jean Newlove and Peggy Seeger.

He died in October 1989 of complications following a heart operation.

It’s Grim up North-at least according to Andy Burnham