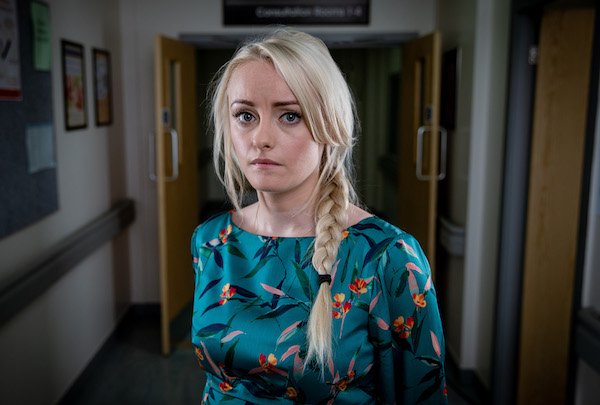 Coronation Street actress Katie McGlynn has told the BBC that she wanted her character, Sinead Osbourne, to die because “life’s not a happy ending.”

In an interview with BBC Radio 5 Live podcast You, Me and the Big C, Katie explains that she felt it was important that the plot is realistic. This week’s Coronation Street will culminate in two moving episodes focusing solely on the last day of Sinead’s short life and her farewell to her loved ones.

Explaining how she influenced the story, she says: “I had a meeting with [Coronation Street producer] Kate Oates two years ago, because I felt a bit lost here. I wasn’t sure what I was doing and I wanted a storyline – or I wanted to leave I think.

“She said ‘What do you think about doing this cancer storyline?’ And I said yeah that sounds great and she said ‘We don’t know how it’s going to end though Katie’.

“I kind of shot myself in the foot, because I protested against her surviving. I wanted her to die and I know that sounds really sadistic and awful but I wanted a big impact. I wanted a big bang and I wanted to rub it in people’s faces, yes it does happen, life isn’t a fairytale – people die.

“I’m sick of TV shows, not necessarily soaps, but people are just acting like ‘oh it’s a happy ending’. Life’s not a happy ending. I know it can be and you can get over it, but tragedy does happen and I just wanted to showcase that and try and raise awareness for it, I guess. I’m not Mother Teresa, so I wanted a big impact for it. “

Katie’s character is a young mum who was diagnosed with cervical cancer while pregnant in 2018, after ignoring symptoms.

She started her treatment but then stopped temporarily as she was worried it would harm her unborn child. She restarted chemotherapy and for a time it looked as if it was going well, but last month on her wedding day she discovered a lump and was told that the cancer was untreatable.

Her fellow Coronation Street actress Sally Dynevor, who plays Sally Metcalfe has also spoken to the You Me and the Big C team, discussing her own experience of finding out that she had breast cancer ten years ago.

Sally was diagnosed at the same time that her character in the soap was undergoing treatment for the same illness.

She tells the team she is a big fan of You Me and the Big C, and regrets saying no to appearing as a guest when podcast founder Rachael Bland first approached her.

After thinking it would be depressing and upsetting, she changed her mind when she listened to it.

She says: “I started to run with my podcast and it was You me and the Big C. I was running and I was thinking I should have done that, I’m really enjoying it. It’s fun, it’s not serious it’s a really lovely programme to listen to. I really regretted that I hadn’t done it.”

She also reveals that the plot is too realistic for her and she has not been able to watch the story unfold.

“I can’t watch it,” she says. “ I think they’re doing a brilliant job don’t get me wrong.  It’s so brilliant it makes me not want to watch it. But only because it’s self preservation, you know. I don’t need to keep going there. “

You Me and the Big C is BBC 5 Live and BBC Sound’s multi award winning podcast about cancer.  You Me and the Big C was created by BBC journalist Rachael Bland who died from breast cancer in September 2018. The podcast has won mulitiple awards, and is now presented by her co-hosts Lauren Mahon and Deborah James, along with Rachael’s husband Steve Bland.

Listen to You, Me and The Big C’s full interview about the Coronation Street storyline on BBC Sounds now.

Social media, gardening, books, bread and having sex – how Britons are whiling away...