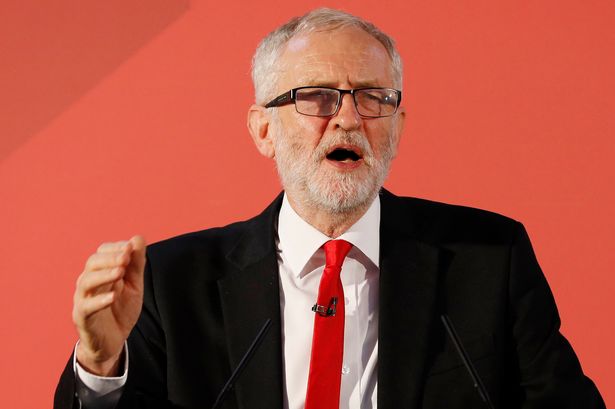 Jeremy Corbyn will pledge to “get Brexit sorted” in six months and will accuse Boris Johnson of trying to “hijack Brexit to sell out our NHS and working people by stripping away their rights.”

In a Major speech this morning,Corbyn will challenge the Conservative Party’s efforts to “suppress” reporting of the estimated £500 million per week cost to the NHS of Johnson’s sell-out deal with Donald Trump.

He will say that “Johnson’s Trump deal Brexit puts a price tag on our NHS” and declare that under Labour “our NHS is not for sale”.

The Labour Leader will say that Johnson’s “real agenda” for Brexit is to “reverse hard-fought gains won by working class people over generations”, calling it “Thatcherism on steroids”.

Corbyn will say that in place of Johnson’s sell out-deal, Labour will “get Brexit sorted in six months by giving the people the final say” so Britain can “get beyond Brexit”.

On Johnson hijacking Brexit to sell out our NHS, Jeremy Corbyn MP, Leader of the Labour Party, will say:

Boris Johnson is trying to hijack Brexit to sell out our NHS and working people.

Many people who voted to leave tell me they were voting for change. Johnson and the Leave campaign promised to rebuild our NHS.

Johnson stood in front of a bus and promised £350 million a week for the NHS. Now we find out that £500 million a week could be taken out of the NHS and handed to big drugs companies under his plans for a sell-out trade deal with Donald Trump.

We now know that US and UK officials have been discussing drug pricing in secret and the US government is demanding “full market access for US products.” Senior NHS managers have said that would mean “higher prices for medicines” which will “pass on costs to both patients and the NHS.”
Behind the scenes, the Conservatives have tried to suppress the news, attacking the BBC for reporting what we and health professionals are saying. This is what they don’t want you to hear: a vote for Johnson’s Conservatives is a vote to betray our NHS in a sell-out to Trump.

Johnson’s Trump deal Brexit puts a price tag on our NHS. So we’ll say it again and again until the message gets through to the White House: our NHS is not for sale.”

On Thatcherism on steroids, Jeremy Corbyn will say:

This threat to our NHS isn’t a mistake. It’s not happening by accident. The threat is there because Boris Johnson’s Conservatives want to hijack Brexit to sell out the NHS and sell out working people by stripping away their rights.

Given the chance, they’ll run down our rights at work our entitlements to holidays, breaks and leave.

Given the chance, they’ll slash food standards to US levels where “acceptable levels” of rat hairs in paprika and maggots in orange juice are allowed and they’ll put chlorinated chicken on our supermarket shelves.

And given the chance, they’ll water down the rules on air pollution and our environment that keep us safe.
They want a race to the bottom in standards and protections. They want to move us towards a more deregulated American model of how to run the economy.
In the US workers get just 10 days holiday a year, big business gets free rein to call the shots and tens of millions are denied healthcare.

What Boris Johnson’s Conservatives want is to hijack Brexit to unleash Thatcherism on steroids.

Margaret Thatcher’s attack on the working people of our country left scars that have never healed and communities that have never recovered. The Conservatives know they can’t win support for what they’re planning to do in the name of Thatcherism. So they’re trying to do it under the banner of Brexit instead.

On sorting Brexit in six months, Jeremy Corbyn will say:

A Labour government will get Brexit sorted within six months by giving you, the British people, the final say.

It won’t be a re-run of 2016. This time the choice will be between leaving with a sensible deal or remaining in the European Union.
So an incoming Labour government will first secure a sensible deal. That will take no longer than three months because the deal will be based on terms we’ve already discussed with the EU, including a new customs union, a close single market relationship and guarantees of rights and protections.

And we will immediately carry out your decision so Britain can get beyond Brexit.