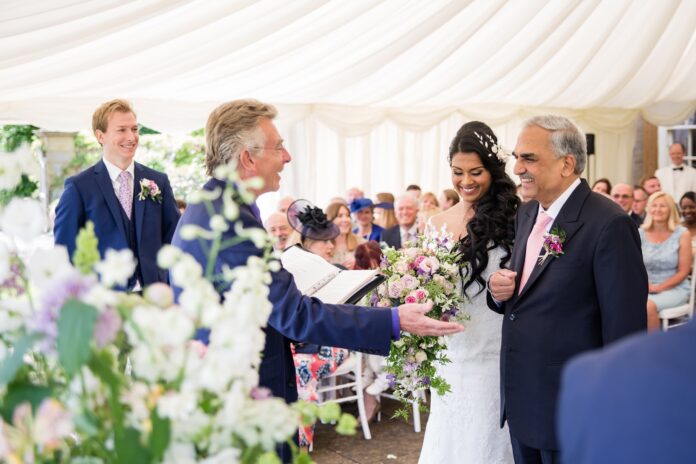 The law on weddings in England and Wales has been too slow to respond to religious and cultural diversity and the increasing number of people who do not identify with any religion at all, finds a new study led by University of Warwick researcher Dr Rajnaara Akhtar of Warwick Law School.

The report, When is a wedding not a marriage – Exploring non-legally binding ceremonies1, funded by the Nuffield Foundation, explores the likely impact of proposals for weddings law reform published by the Law Commission in 20203. The raft of reforms proposed include a change to the way weddings are regulated, and where they can occur, and the process of giving notice.

Under the current law, in England and Wales a civil wedding can only be conducted in a register office or on “approved premises” such as an hotel or stately home. There are special rules for Anglican, Jewish and Quaker weddings; other religious weddings can only be conducted in a registered place of worship and must include words prescribed by statute. As a result, religious weddings taking place outside of these locations/circumstances in England and Wales do not have legal force.

In addition, despite growing demand there is no option for a couple to have a legal wedding led by a Humanist or independent celebrant

Dr Akhtar, together with Professor Rebecca Probert and Sharon Blake of the University of Exeter, used focus groups and interviews to engage with 170 participants who had conducted or taken part in a non-legally binding wedding ceremony to understand why people choose to have marriages that are not legally recognised, and what they would like to see change if reforms go ahead.

Those conducting ceremonies who took part in the research came from many faiths and none, including imams, Hindu priests, a Baptist minister, a Zoroastrian priest, a representative of the Bahá’í, rabbis, Anglican and Roman Catholic clergymen, an Evangelical Christian minister, a Sikh minister and two Pagan celebrants. Humanist and independent celebrants also took part. Eighty-three interviews were also held with people who had had a non-legally binding ceremony, reflecting a wide range of experiences of getting married under the current law.

The study found that the current law is not perceived as treating all faiths equally, giving a sense of unfairness and a feeling that there was a lack of respect for other religions and beliefs. The requirement for premises to be licensed was viewed as an unfair restriction, which prevents faith groups without registered places of worship from conducting legal weddings, while people from groups with just a few registered places of worship may have to travel across the country in order to have a legal wedding. Most participants supported the idea that the person officiating the wedding should be regulated rather than the place in which it occurs to help offset these challenges.

While recognising that proper checks were important, many people found the legal formalities in advance of the marriage complex and off-putting and would like to see them simplified. Where giving notice of intention to marry is concerned, participants generally agreed that an in-person meeting should still be required prior to the wedding as a safeguard to verify identity and to counter forced or sham marriages. However, some parts of the process could be on-line for greater ease.

Regarding the ceremony itself, the requirement to use phrases set out in law in order to enter a legally valid marriage was problematic to many participants. Some wanted greater freedom to choose a form of words meaningful to them; others found them intrusive in any non-Anglican religious ceremony. There was support for the idea of the roles of officiant and celebrant being split, meaning that couples would be able to have the ceremony conducted by a person of their choosing, even if they were not authorised, as long as an officiant was present to ensure that the legal requirements were met.

Finally, the cost of weddings on approved premises was a major factor in the decision of some couples to have a non-legally binding ceremony before or after their (generally smaller) legal wedding.

Dr Akhtar said: “Overall we found a high level of support for the Law Commission’s proposed changes, among both those who were involved in conducting non-legally binding ceremonies and those who had had such a ceremony. The proposed scheme was seen as simplifying the law governing weddings, making it easier to understand, reducing the bureaucracy of the process, and making it easier to get married.”

Ash Patel, Justice Programme Head at the Nuffield Foundation said: “This research highlights some of the flaws and inequalities present in the existing law surrounding weddings. The findings demonstrate the need for reform to how legal weddings can be conducted, and support for change among celebrants and those seeking to have a wedding ceremony not currently recognised in law. The research is timely given the Law Commission’s current consultation on potential reforms to the law governing how and where couples can get married.”

Police search after woman in her 20’s raped in Withington

Education Manchester to return for a second series