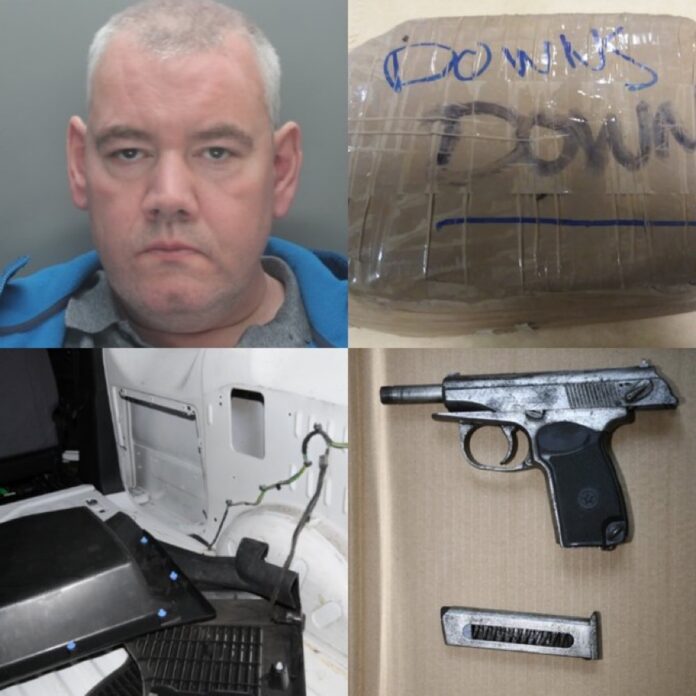 A man from Kirby who nicknamed himself ‘El Shepo’ has been jailed following a lengthy investigation into an organised crime group who were involved in the supply of both cocaine and heroin across the UK.

Ian Shepherd aged 44, of Quarry Close, Kirby, was jailed today for 25 years at Manchester Crown Court after the court heard he was leading an organised crime group based in Liverpool.

The group, consisting of Shepherd, John Burkquest, Robert Curran and Paul Farrelly were being closely monitored by police from September 2018 to February 2019. During this time officers witnessed both Shepherd and John Burkquest, often together, travelling to towns and cities across the UK to supply hundreds of thousands of pounds worth of cocaine and heroin.

As part of their disguise, Shepherd would use a Citroen Berlingo van to travel the country for the cash and drug exchanges, and the men would wear high-visibility vests as a cover to give the impression they were all tradesmen.

In December 2018, GMP were able to acquire the Citreon Berlingo after Shepherd put it up for sale.

Police then identified that the vehicle had been modified to incorporate a hide in the rear compartment which was only accessible using an adapted wheel trim removal tool and was large enough to transport large quantities of drugs.

Following this, in February 2019, Burquest and Curran were stopped by officers in Stockton-on-Tees whilst they were travelling to supply nearly a kilogram of heroin to individuals in the North East region.

Burquest had subsequently fled from the vehicle on foot and discarded of the heroin in a wooded area as he ran from officers. He was swiftly detained and following an extensive search of the area officers recovered a black sports bag containing the heroin.

Both men were arrested and later released on bail.

Following his arrest and subsequent release, Burquest travelled back to the area from Manchester in a bid to recover the drugs, unaware that they had been seized by officers.

As the investigation progressed, later that year in May officers executed a firearms warrant at Shepherd’s mother in law – Marion Newall’s – home address in Merseyside.

Following a search of the property officers located a void in a kitchen unit that was being used to store drugs and a silver handgun.

Officers also recovered a number of mobile phones and cash amounting to more than £2,000.

Analysis of mobile phones throughout the investigation showed Shepherd had also nicknamed himself ‘El Shepo’.

Following DNA tests, both Shepherd’s and Newall’s DNA were recovered from the firearm.

The investigation culminated in a strike day in July 2019 which saw all four men arrested and subsequently charged for their involvement in the drug supply chain.

Shepherd was also sentenced for his involvement in an investigation conducted by Merseyside Police.