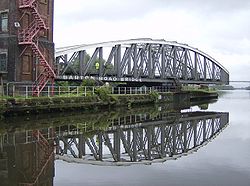 The woman was walking over the swing bridge on Barton Road in Peel Green when she noticed that a man was following her.

He disappeared for a few minutes after going under a canal bridge, but emerged behind the woman again while she walked down Peel Green Road.

As the woman sped up and crossed onto Langland Drive, the man grabbed her and dragged her into a narrow alleyway that leads to Boscombe Avenue.

The victim struggled against the offender and managed to break free, after which the man fled back onto Langland Drive and headed towards the swing bridge.