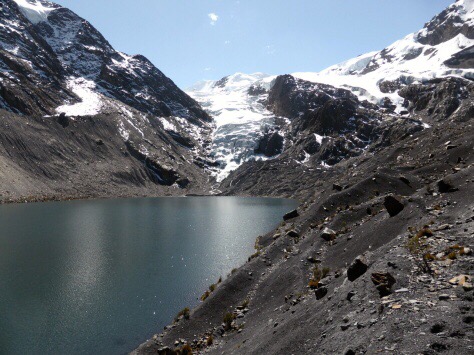 The new study, led by Manchester Metropolitan University, is one of the first to monitor recent large-scale glacier change in Bolivia, and has discovered that they have shrunk by 43% between 1986 and 2014 and will continue to diminish if temperatures in the region continue to increase.

The glacier recession increases the risk of lakes bursting and flooding downstream while also putting water supply in the region at risk say the experts whose research has led us to understand how receding glaciers could affect communities in the country.

Dr Simon Cook, Senior Lecturer in Physical Geography at Manchester Metropolitan and lead author, said: “Glacier recession is leaving lakes that could burst and wash away villages or infrastructure downstream.

“Some lakes are very small and pose little risk. Others are very large, but there’s little or no possibility that they would drain catastrophically. Others are both large enough to create a big flood, and sit beneath steep slopes or steep glaciers, and could be dangerous.”

Receding glaciers also put water supply in the region at risk. Glacial meltwater is important for irrigation, drinking water and hydropower, both for mountain villages and large cities such as La Paz and El Alto.

Throughout the year, the 2.3 million inhabitants of these two cities receive about 15% of their water supply from glaciers, with this percentage almost doubling during the dry season. Glacier retreat also means less water is available to supply rivers and lakes, such as southern Bolivia’s Lake Poopó, which recently dried up.

As glaciers recede, they leave behind lakes typically dammed by bedrock or glacial debris. Avalanches, rockfalls or earthquakes can breach these dams, or cause water to overflow, resulting in catastrophic floods known as glacial lake outburst floods. The team reports that both the number and size of glacier lakes in the study region increased significantly from 1986 to 2014.

After studying glacier change, the researchers used their 2014 glacial-lake observations to identify the lakes where outburst floods could occur and present a hazard to populations.

They identified 25 glacial lakes across the Bolivian Andes as potentially dangerous to communities and infrastructure, as they could result in damaging floods. If the smallest of these 25 lakes was to drain completely, it would yield a flood with a peak discharge of 600 cubic metres per second. The largest could result in a discharge of over 125,000 cubic metres of water, about 50 times the volume of an Olympic swimming pool, in a second.

While measuring glacier area change was a relatively simple task, Dr Cook said that identifying which lakes are dangerous is difficult due to the various factors that have to be taken into account.

He added: “We considered that a lake was dangerous if there were settlements or infrastructure down-valley from the lake, and if the slopes and glaciers around the lake were very steep, meaning that they could shed ice or snow or rock into the lake, which would cause it to overtop and generate a flood – a bit like jumping into a swimming pool, but on a much bigger scale.”

Such catastrophic floods have occurred in the region in the past. Dirk Hoffmann, a researcher at the Bolivian Mountain Institute and co-author in The Cryosphere study, recently documented a glacial lake outburst flood in the Apolobamba region that happened in 2009 and killed farm animals, destroyed cultivated fields and washed away a road that left a village isolated for months.

Dr Cook says these events could be under-reported, suggesting the risk of such floods in the Bolivian Andes has been overlooked.

In the study, the team also estimated that glacier area will be severely reduced by the end of the century, to about a tenth of the 1986 values. This would put communities even more at risk from water scarcity.

Dr Cook said: “We predicted that most glaciers will be gone or much diminished by the end of the century – so where will the water come from in the dry season? Big cities like La Paz are partially dependent on meltwater from glaciers. But little is known about potential water resource stress in more remote areas. More work needs to be done on this issue.”

Hawk hired to scare off roof-pecking squatters at Manchester Victoria