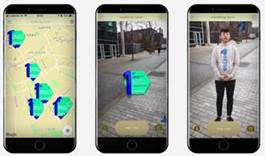 The walking tour aims to celebrate Manchester’s rich history of innovation as well as inform citizens on the pioneering developments which are being undertaken across the city as part of the CityVerve project, which will shape the future.

The launch marks the start of CityVerve’s journey to highlight Manchester as a City of Firsts, celebrating how many milestone innovations have and are being created in Manchester. From the first ever meeting of Charles Rolls and Henry Royce and consequent formation of Rolls-Royce, to the splitting of the atom, Manchester is home to a number of pioneering developments and movements. Through the Buzzin app, the tour celebrates the achievements of Manchester, both past and present, and hopes to inspire the next generation to replicate similar pioneering innovations in the future.

The app takes users on a tour of the Oxford Road Corridor, Manchester’s innovation district. Throughout the tour there are 13 plaques positioned to highlight where the in-app experiences live, which is tied to GPS coordinates. These visual markers are where the AR characters come to life though the users’ smartphone, with virtual tour guides telling the stories of why Manchester is a City of Firsts while encouraging Mancunians and visitors to get out and explore the city first hand.

As part of this, CityVerve has also collaborated with Pentatonic which strives to turn rubbish (problems) into products (opportunities). In another first for Manchester, the AR scan-able plaques around Manchester’s innovation district have been created with rubbish to help preserve the energy and environment and bring another forward-thinking approach to the city.

Rowena Burns, Chair of Manchester Science Partnerships, one of the leading partners in CityVerve and host to two of the plaques said: “Augmented Reality is ground-breaking technology. It uses computer generated imagery to bring ideas to life, and allows the viewer to experience first-hand how innovation can change and improve our world. The new walking tour will encourage citizens and visitors to explore innovation on the Oxford Road Corridor, and highlight what CityVerve is doing to make Manchester the UK’s smartest smart city.”

Mark Williamson, Digital Marketing Executive, SPARTA Digital commented: “We are proud to be a part of this journey to celebrate Manchester as a city of firsts. Augmented Reality has the capability to not only engage users, but to bring stories to life and by doing so, inspire Mancunian’s to join the charge and helps solve some of the world’s biggest challenges.”

The app is available on Apple and Android devices and more information can be found here.

Smoking continues to decline in the North West