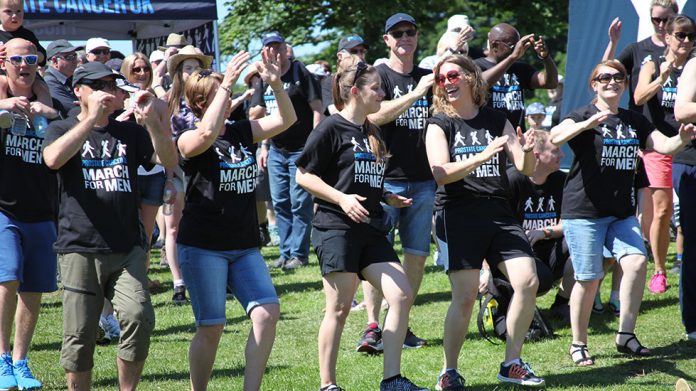 Prostate Cancer UK will be Marching for Men again in 2018 – with an even bigger and better walking programme unveiled as the charity makes further strides to stop prostate cancer being a killer.

After a successful launch of the charity’s flagship walking campaign last year raised more than £1 million, there is even more reason for people to put their best foot forward and combat the most common cancer in men.

Stepping up to the challenge, the leading men’s health charity will be recruiting an army of walkers to make strides through picturesque parklands up and down the country, and save lives in the process.

Across seven cities throughout the UK in June, families, friends and loved ones will be pulling on their walking boots and converging on public spaces to March for Men.

Starting with a North West double header in Manchester at Wythenshawe Park and Liverpool on Sunday, June 10th, the countrywide quest to fight back against a disease that kills one man every 45 minutes continues across Father’s Day weekend (16-17 June), with London, Bristol and Glasgow also hosting the family-friendly walks.

The marches continue in Leeds on June 23rd before concluding a week later in Nottingham, on Saturday 30 June.

Football fans in London and the South East will also have the option to take part in an epic series of convergence marathon marches across the capital on Sunday, 22nd July, all culminating at Wembley.

The Football March for Men will see legions of walkers setting off on the road to Wembley, starting out from four clubs, West Ham United, Millwall, St Albans City and Sutton United, and heading to the home of English football. The march to the arch will take in 15 clubs and create a fabulous finale.

Sleep, who was diagnosed and treated for prostate cancer in 2015 and will be leading the London March for Men for the second year running commented “I was one of the lucky ones – thankfully my prostate cancer was detected early and I received treatment before it spread elsewhere. But thousands of other men are not so lucky, every year prostate cancer continues to claim the lives of nearly 12,000 fathers, brothers, partners, and friends and this must stop.”

Holby City and Former Emmerdale actress Oaten added: “When I found out my dad’s prostate cancer had come back last year, my world collapsed. But he’s a fighter and he’s not letting it get the better of him. His courage is inspirational. Ever since I’ve wanted to do everything I can to fight this disease so that in the future it won’t strike the heart of other families like it has mine.

“I’m proud to be leading the Leeds March for Men this June to raise funds for the amazing research that Prostate Cancer UK is driving forward. I want to encourage anyone who has a man in their life to head to one in their local area and join the fight against this terrifying disease. Together we can beat this.”

On Father’s Day weekend, last year, the inaugural March for Men events saw over 1,600 walkers take to the parks of London, Leeds and Glasgow raising more than a quarter of a million pounds.

And during the last two years, Sky Sports presenter Jeff Stelling, flanked by a cast of celebrities and civilians, has walked more than 650 miles across 25 marathons the length and breadth of the country, raising £800,000.

Prostate Cancer UK’s Chief Executive, Angela Culhane, walked more than 130 miles with Stelling during the legendary jaunts from Hartlepool United to Wembley and Exeter to Newcastle United. She said: “I’m thrilled that our walking programme continues to gather momentum, and look forward to beating the drum even louder across the UK this year as we mobilise legions of our supporters.

“One man dies every 45 minutes from prostate cancer, and we now know this disease is the third biggest cancer killer. That’s unacceptable. We need to turn that around and the wonderful efforts of Jeff, Wayne, Gemma and everyone who has walked for us previously have laid the foundations.

“Thanks to the money raised we can fund more ground-breaking research, and it will also help us provide dedicated support and information to men and their families and make prostate cancer a disease the next generation of men need not fear. We’ve got a way to go but these walks are the perfect way to take a step in the right direction.”

The substantial sums raised by fundraising will help ‘shift the science’ and crack the three core issues of diagnosis, treatment and prevention, which have been left unsolved for too long. It will also help provide support and information to those affected by the disease.

Many people are unaware that prostate cancer is the most common cancer in men. It’s a huge issue that cannot be ignored. One man will die from prostate cancer every 45 minutes in the UK. That’s over 11,800 men a year. Based on current trends, if we ignore prostate cancer and do nothing, this number will rise to over 14,500 men a year by 2026.

To sign up to a March for Men or find out more information go to prostatecanceruk.org/march.

Over 30 years of HIV