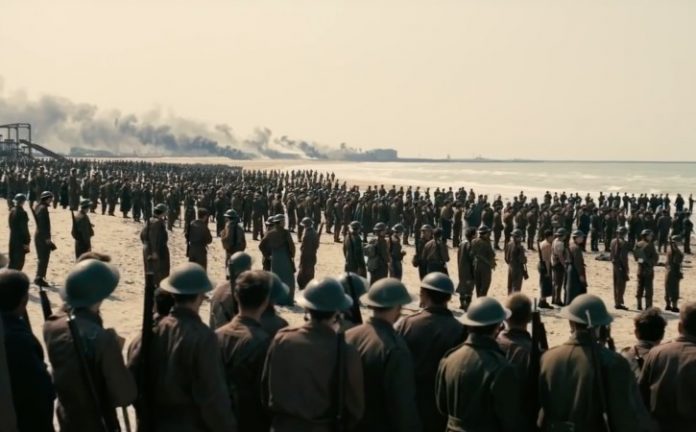 Christopher Nolan’s highly anticipated Dunkirk hit cinemas last weekend, and made an astonishing £38.45 million during its opening weekend. Aside from the success of this year’s adaptation of Disney’s Beauty and the Beast, Dunkirk has already proven its success charting the US and UK box offices in just a matter of days.

Claimed to be shaping Britain’s identity in a post-Brexit era, the Hollywood blockbuster is a shining, but unsurprisingly imperfect, example of British nationalism. With Winston Churchill’s infamous “We shall fight on the beaches” speech voiced through the young soldier, an overwhelming sense of patriotism and national pride is felt just as the film concludes. The message is clear that even on the brink of defeat, our nation stands strong and determined.

However, with such high expectations for Nolan’s production, especially after the successes of the Batman trilogy, Dunkirk is not void of criticisms. Amongst these are claims of Hollywood white-washing and Western-centrism, critics have bashed Nolan’s production for the lack of Indian and African representation. With accusations of Euro-universalism vision of a World War II battle, Dunkirk is a far cry from realism which the visual graphics so desperately seek to achieve. Erasing the Royal Indian Army Corp services, which were present on the beach, the film also ignores that men from South Asia and East Africa, counted for one of four crewmen on British merchant vessels, and so thus participated in large numbers in the evacuation.

Whilst the film does highlight the anglo preferences of the soldiers, with many French soldiers told that the initial evacuation ship was for ‘English only, Seulement Anglais’, it fails to show that many French soldiers deployed at Dunkirk included soldiers from Morocco, Algeria, Tunisia and other colonies.

The representation of the Germans has also caused a stir amongst critics, with none actually present on screen. Instead we see a toying series of bombs and air raids which play cat and mouse with the soldiers, and subsequently with the heartstrings of the audience. The Germans appear to be a unit of identity-less machines, causing some to critique the film’s dehumanisation of the wartime European power.

Whilst the film has its flaws, the epic music score cannot be ignored. Hans Zimmer’s composition is intense and perfectly heightens the emotion felt both on and offscreen.  Intertwining the sounds of the aircraft, the air raid signals and gunfire, the score is almost palpable.

Working well with the musical composition is the surprisingly short script. The minimal amount of speech is potent, shown through the opening scene which is powerfully silent. What is spoken between soldiers is few and far between, and yet in spite of this, it is not needed or missed in the slightest. What is communicated between the private soldiers is fear, anxiety and yet a determination to survive the impossible. Perhaps this is the representation of the silencing shock that other attempts at depicting war fail to adopt.

The star-studded cast features the likes of Tom Hardy, Cillian Murphy, Kenneth Branagh, Oscar-winning Mark Rylance and Harry Styles – making the film the debut acting role for the former One Direction band member. Hardy’s performance is perhaps one of the greatest, playing the unbelievably brave and noble spitfire pilot, Farrier. In a turn of events that will leave you constantly on the edge of your cinema seat, it is Tom Hardy who steals the show for many audiences.

Harry Style’s performance is also one that cannot, or at least should not, be heavily critiqued. Alongside two other central private soldiers, the narrative follows the journey the soldiers make escaping from Dunkirk. Styles’, Fion Whitehead’s and Aneurin Barnard’s ebb and flow of hope and then panic resonate deeply with viewers. Their performance will be sure to tug on the toughest of heartstrings.

The Sleeping Green Between