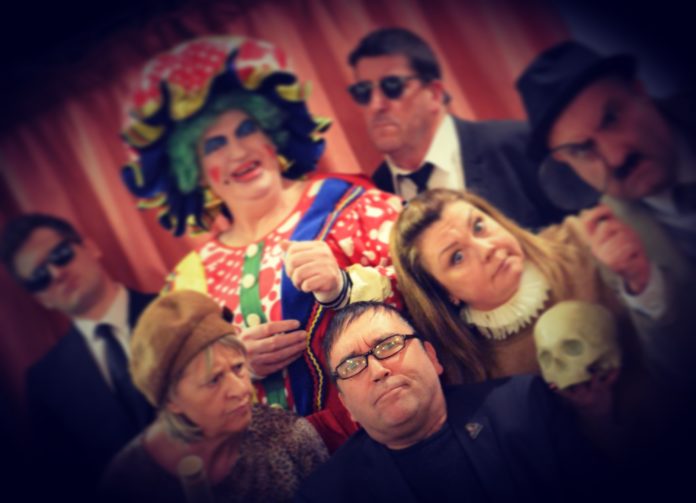 The April production at Lyceum Theatre Oldham has been written specially for the 90th Anniversary celebrations.

It has been written by award-winning local playwright Colin Smith, who is well known for much more than his association with this quality amateur theatre company. Colin can often be seen on stage and is just as likely to be taking the production photos.

This is his third play to reach production and follows the successful Heaven Knows I’m Miserable Now and Sleeping Dogs. Written in 2010, Heaven Knows…  has so far received four productions, including its first successful run at Lyceum Theatre Oldham. It went on to win a Greater Manchester Drama Federation award for ‘Adventure in Theatre’. Colin’s second play, Sleeping Dogs, was produced at Guide Bridge Theatre last year.

Play is a comedy which takes inspiration from all sorts of theatrical genres. It is a nightmare journey through the mind of playwright Brian Simpson, who finds himself on opening night with the audience in situ but with no play! Through dreamlike sequences and hilarious interruptions from family and bizarre characters, Brian (played by Colin himself) is determined to get a show on stage, created in front of the eyes of the audience.

According to the playwright: ‘Play’ hopes to amuse and entertain and provide you the sort of play you have never seen before and probably never will again.

The production is directed by Steve Bennett and has a large cast of characters with many regular faces and a few surprises in casting!

Gwyneth Strong to star in The Mousetrap at The Lowry

The Worst Witch flies into Salford with an action packed new adventure for the...