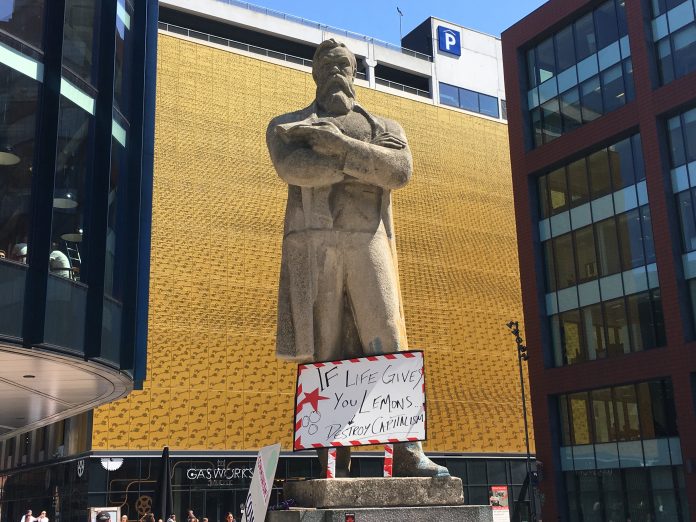 If you’re looking for ways to spend your time and are wondering whats on this week in Manchester, you need not look further.

From theatre, music, art and more, we have it all.

This is Human: US, HOME

Until 30 August Us will showcase the first public introduction to the Project X Collective at home. Featuring photography that illuminates the group’s past and future, the exhibition highlights the diversity of the Manchester-based artists.

After its sell-out London run, Derren Brown: Underground will hit Manchester’s Lowry Theatre for just two more days. The multi-award winning master of psychological illusion will create a spell-binding experience of showmanship and magical genius before your very eyes.

Promising the ultimate Friends experience, FriendsFest will open at Heaton Park on 4 August and will run until 13 August as part of its 12 week tour of the UK. With brand new features including a full scale set of Joey and Chandlers apartment and never-before-seen memorabilia and props from the show, its a chance not to be missed. Relive the memories of Monica and Rachel’s apartment, grab a coffee in Central Perk or stop for a quick bite in Monica’s Moondance Diner.

Not to be confused with the Disney hit, Vulture Theatre’s Frozen follows the events after10-year-old Rhona goes missing. Her mother, Nancy, subsequently withdraws into a state of frozen hope. The play, which is brought to you by recent drama school graduates, examines the human capacity for forgiveness when faced with the unforgivable.

To celebrate the 10 year anniversary of her platinum selling debut album, Made of Bricks, Kate Nash will be performing at the O2 Ritz this week. With Skating Polly as the support act for the show, the award winning activist singer is one not to be missed.

The winner of the current Jazz North Introduces scheme, Wandering Monster is Sam Quintana’s outlet for his inventive, energetic compositions. Comprising of intense melodies and electrifying off-kilter grooves, be sure not to miss out on seeing the accomplished young instrumentalists from the Leeds jazz scene.

Reveal is a group of contemporary Printmakers from the North West of England working out of Salford’s prestigious Hot Bed Press. The members come from a diverse range of backgrounds involving both art and science, and draw inspiration from a broad choice of subject matter, both emotional and physical, as well as each from each other.Their work varies from imaginative figurative works including views of rural and industrial landscapes, pictures of people and still life, through to vivid abstracts.

On the first Saturday of every month, Cheadle experiences the Maker’s Markets, selling the very finest local food, drink, art and craft. The event is ideal for the whole family, with activities planned even for little market visitors. Taking place in the centre of the village green, have a fun packed day and try something new with The Maker’s Markets.

Create beaming smiles on little faces by joining the East Lancashire Railway as they welcome Thomas for a day of family-filled fun. For a chance to have a train ride with Thomas as well as variety of Thomas & Friends ™ themed entertainment, be sure to book tickets. Guest holders will also meet The Fat Controller from the Island of Sodor.

In the Night Garden Live, The Trafford Centre

In the Night Garden Live takes place in its own family-friendly Showdome, with its beautiful costumed characters, puppets, breathtaking projections and spacious seating stand.

In Manchester for three weeks only, there are 4 shows a day at 10am, 12 noon, 2pm and 4pm. Don’t miss your chance to see Igglepiggle and friends live this summer.

Taking place on the first Saturday of every month, The Urmston Artisan Markets have become one of the highlights of the town’s calendar. In a magnificent spectacle, the markets are an opportunity to browse stalls, taste the culinary treats, talk to artists, vintage dealers and designer-makers, or sample the hot authentic street food whilst being entertained by local musicians.

The International Anthony Burgess Foundation proudly presents award-winning poets from Canada alongside poets who live and work in the Manchester and Salford area. The event will see the likes of Jeanette Lyne, Catherine Graham, Albert F. Moritz (A.F. Moritz), Ian Burgham and more. The event has a minimum age requirement of18.

B*witched, Big Brovaz and Blazin’ Squad are set to hit the O2 Ritz this Sunday. Marking their 20th anniversary, B*witched, the irish girl-band, are making their comeback with new songs, intertwined with their well-known hits such as ‘C’est La Vie’.

The Wicked Path and Friends: Free Live Americana and Blues

The Wicked Path live music night takes place every Sunday at Odd Bar.Round up your weekend over a few beers with live Americana, Blues, Folk & beyond. This Sunday’s lineup will see Tom Blackwell take centre stage.

Standing as one of the most famous open mic nights in the country, King Gong showcases up-and-coming comics. With MC – Mick Ferry – hosting, its up to you, and the gong, who wins.

Starring Olivier Award-winning Sheridan Smith as Fanny Brice and Darius Campbell reprising his role as Nick Arnstein, the critically acclaimed West End production returns to Manchester. Funny Girl brought global fame to Barbra Streisand 50 years ago and boasts some of the most iconic songs in film and theatre history, including Don’t Rain On My Parade and People. Hailed as ‘utterly irrestible’, Funny Girl is not to be missed.

The Wizard of Oz, Stockport Plaza

Starring Cheryl Fergison (EastEnders’ Heather Trott) as the Wicked Witch of the West, this magical show is sure to put a smile on every face. Click your heels together and join Scarecrow, Tin Man, Lion, Dorothy andToto, as they follow the Yellow Brick Road to the Merry Old Land of Oz. This classic family show includes a hilarious script, dazzling costumes and sets, plus a wealth of songs and show-stopping choreography.

Taking place Spinningfields, Oast House are hosting (or rather, hoasting) a weekly series of al fresco screenings. This week’s film choice is Christopher Nolan’s 2010 Inception. The viewing area can seat up to 350 people. No tickets are necessary, just attend at 6pm to watch the film.

In celebration of their 1st birthday, the Manchester Gamers Unite will be hosting a free entry event in DiveBar in the Northern Quarter. For one night only, you will have the exclusive chance to play indie games in development by local studios that are not yet released.

A key member of the California soft rock scene in the 70’s, Ned Doheny reached cult status thanks to his 1976 album ‘Hard Candy’ which featured anthems such as ‘Get It Up For Love’, ‘To Prove My Love’ and ‘A Love Of Your Own’.

A timeless record that exudes the California sunshine, Ned performs at Band on the Wall for a very rare Manchester show with a fully fleshed out live band.

This original one-woman show stars Sweeney Todd’s partner in crime, Mrs Lovett. Be appalled by a variety of other grotesque characters from the cheap and grisly pages of the Victorian era’s penny dreadful papers, in a theatrical comedy suitable for all the family.

The all-male troupe from the amazing HandleBards perform their bicycle-powered production of Shakespeare’s A Midsummer Night’s Dream in Ordsall this week. Cycling from London to Edinburgh, the HandleBards stop for one night only in Manchester. In usual HandleBards style, expect riotous amounts of energy, a fair old whack of chaos, and a great deal of laughter for their take of the Shakespeare classic.

In return trip from Bury to Rawtenstall, the Wizard Express steam train takes you on a two hour experience with costumed characters, including sorcerers and wicked witches. With magical activities along the line and plenty of magical photo opportunities, The School of Wizardry is a perfect day out for all of the family.

Santa Gets Dirty at Yard & Coop This Christmas