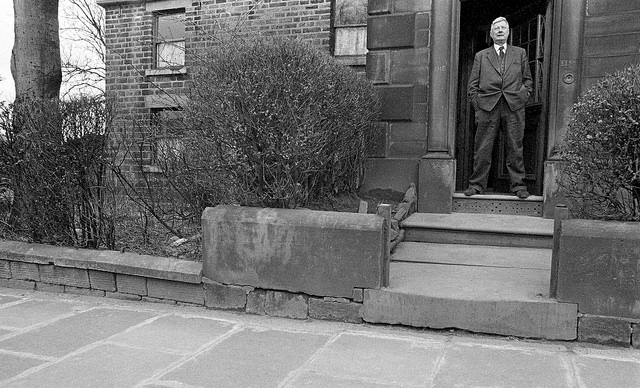 Rare photographs of LS Lowry – ‘lost’ in the attic of a celebrated photographer for more than 50 years – are to go on display at The Lowry for the very first time on Saturday (10 June).

Taken by Clive Arrowsmith in 1966 as part of a commission for the legendary Nova magazine, the images provide an extraordinary insight into the private life of one of Britain’s most popular artists.

They are now the focus of a major exhibition, Lowry at Home: Salford 1966 – Unseen photographs by Clive Arrowsmith, which will run from 10 June – 24 September 2017.

The photographs show Lowry at his home in Mottram-in-Longdendale and on the streets of Salford – the setting for many of his iconic industrial scenes.

Nova only ever published a small selection of the commission – and the remaining images were filed in the Arrowsmith archive, where they remained until they were uncovered by his daughter, Eugenie, who was cataloguing her father’s work.

Clive is best known for his iconic images of some of the world’s most famous actors, models and rock stars – from Jean Shrimpton to David Bowie.

During the opening weekend (Sat 10 and Sun 11 June) he will be giving members of the public visiting the exhibition the opportunity to have their own Arrowsmith portrait taken – in return for a donation to The Lowry Centre Trust, which is a registered charity. (No: 1053962)

Claire Stewart, curator of the LS Lowry collection at The Lowry, said: “Lowry was an incredibly private man, which make Clive’s images all the more special. They show the very sparse nature of his home life, from where he painted some of his most famous work. Needless to say, we were very excited to receive Eugenie’s call and are delighted to be sharing them with the world for the very first time.”

Clive said, “The Lowry shoot was such a graphic insight into Lowry’s hidden life. Having been a painter up until this time, it was this project that changed my mind to photography.”

Clive Arrowsmith’s photographs have been accepted into the collection of the National Portrait Gallery, as is his book, Arrowsmith: Fashion, Beauty and Portraits, that has also recently been added to the collection of Art books at the V&A, London. He is a Fellow of The Royal Photographic Society and his second book accompanies the exhibition at The Lowry and will be available on general sale.

A journey through Northern Landscapes on Televsion