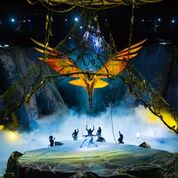 With creative input from James Cameron and experts from the movie’s production, TORUK – The First Flight is unlike any other Cirque du Soleil experience.

With the brilliance of the Cirque du Soleil performers whose athleticism and acrobatics bring to life the Na’vi, the show is a visual effects spectacular where the world of Pandora is depicted through impressive multimedia projections, massive set-pieces and the largest collection of puppetry in Cirque du Soleil history creating a narrative driven official prequel to AVATAR.

“AVATAR is really meant to be a celebration of human motion and human emotion and Cirque is able to capture that absolutely perfectly, because it’s all about human performance and physicality. It makes you feel alive to watch these performers,” said James Cameron.

When a natural catastrophe threatens to destroy the sacred Tree of Souls, Ralu and Entu, two Omatikaya boys on the brink of adulthood, fearlessly decide to take matters into their own hands.

Upon learning that Toruk can help them save the Tree of Souls, they set out, together with their newfound friend Tsyal, on a quest high up in the Floating Mountains to find the mighty red and orange predator that rules the Pandoran sky.

Prophecy is fulfilled when a pure soul rises among the clans to ride Toruk for the first time and save the Na’vi from a terrible fate.

Tickets for those performances will be on pre-sale for Cirque Club members beginning today at 3pm. Public on-sale will start Friday 16 November at 9am. Tickets can be purchased at https://www.cirquedusoleil. com/toruk