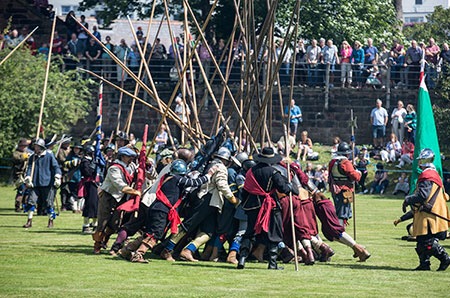 Chester is preparing for the arrival of thousands of 17th Century soldiers for the UK’s biggest battle re-enactment of the year during a free, three day event over the Bank Holiday weekend,

Two thousand Royalist and Parliamentary troops will re-enact the historic battle of Rowton Moor, which saw Charles l fail in his attempt to lift the siege of Chester.

A huge historical encampment will also be set up to include around four thousand people made up of members of the Sealed Knot, their families, friends and supporters.

On Saturday August 29, the Lord Mayor, Councillor Hugo Deynem, will unveil a plaque in the Roman Gardens in honour of victims of the Great Siege of 1645-6, watched by dozens of Sealed Knot members who will then attend a 17th Century wedding in front of the Town Hall.

Then on the afternoons of 30 and 31 August at Chester Racecourse, the Sealed Knot will re-enact Rowton Moor, next to a large historical encampment.

Fought on 24 September, 1645, the battle was intended to relive the siege of Chester, the last port under Royalist control but Charles – watching from the Phoenix Tower, on the City Walls – saw his Cavaliers soundly beaten.

Charles then fled, ordering the city’s already starving and weary citizens to hold out for another ten days. They managed five horrendous months before the walled city fell to Parliament.
Regiments marching on Chester from all over the UK will include men and women from all walks of life – including some whose ancestors served King or Cromwell in the same seventeenth century military units.

And among the converging infantry, artillery and cavalry will be regiments from Scotland and Ireland and mercenaries from the Netherlands, Germany, the Czech Republic and Slovakia.
Lord Mayor, Councillor Hugo Deynem said: “The Civil War is an important chapter in the history of our great city and it is fitting that a plaque will be unveiled to mark what must have been a bloody and terrifying episode with starvation never far away.

“The Bank Holiday weekend will be a step back in time to 1645 for Chester’s thousands of residents and visitors, as they witness the largest re-enacted Civil War battle here in the UK this year, staged by the Sealed Knot’s four thousand members and fellow enthusiasts from across Europe.

Michael Molcher from The Sealed Knot said: “The excitement is building for our event of the year in Chester and we’re looking forward to welcoming re-enactors from across the UK and Europe to this wonderful city. The city has such a rich and important Civil War history, and we want to bring that alive.

“Whether it’s witnessing the battles on Sunday and Monday, seeing soldiers march through the city, visiting our mass encampment or watching one of the dramas unfolding on Saturday, Chester is the place to be this August Bank Holiday weekend.”

On Saturday 12 noon, members of the Sealed Knot will march to the Town Hall where they are welcomed by the Lord Mayor, Councillor Hugo Deynem. Together they walk to the Roman Gardens, where a plaque is unveiled by Councillor Deynem.

From 1pm to 4pm, scenes from The Great Siege and of 17th Century life will be played out at the Cross, on Eastgate Street, and in front of Chester Town Hall. These will include a recruitment drive by the city’s garrison, and a 17th Century wedding.

On Sunday and Monday, a huge historical encampment will be open from 11am until 4pm on Chester Racecourse, giving people the chance to step back in time and see how life was lived in the 17th Century.

Then at 2.30pm (2pm on Monday), the Parliamentarian and Royalist armies will take to Chester Racecourse to battle it out and decide Chester’s fate.