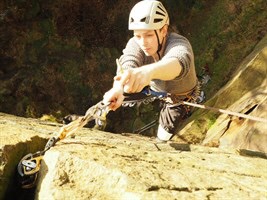 A Young cancer patient who underwent chemotherapy and had to have a leg amputated as part of his treatment, has successfully scaled a gruelling 2,500ft granite rock face in America and has set his sights on white water rafting.

Max Levens, 24, from Rusholme, was diagnosed with osteosarcoma – a bone cancer in his left leg, whilst working as a junior doctor in the intensive care unit at Salford Royal NHS Foundation Trust in March 2014.

Following diagnosis, Max was one of the first patients to be treated at the newly opened teenage and young adult cancer unit at The Christie in Manchester. He underwent courses of chemotherapy and eventually had his leg amputated, but unfortunately his cancer returned.
Max, who has recently returned to Manchester from a holiday in America with two of his friends, received the news before he left.
He said: “It was difficult to hear that the cancer had returned despite having chemo and losing a leg, however I wasn’t going to let that ruin my holiday.
“My consultant told me that the tumour was slow growing so I could delay restarting treatment if I wanted to. I had this trip planned for a while with two of my good friends and I was keen not to cancel it.”
Max and friends Luke and Andy regularly tackle climbing trips together and this venture in Yosemite National Park, California, involved one of the trio’s biggest climbs.
Max added: “Yosemite was an amazing experience and the El Capitan rock was one of our biggest climbs. We spent three days making our way up 700m of the 1,000m vertical ascent, spent a night on a ledge on the rock face then spent the fourth day abseiling down. It was the hardest thing I have ever done but I enjoyed every minute.”
He continued: “Finding out you have cancer is a mixed bag. It was hard losing a leg but you can still find ways to do fun things. One of the best pieces of advice that I was given by a prosthetist was to not expect to do everything I did before in the same way, but to adapt and look for other ways to get the same feelings. That was how Yosemite was – trying out a different style of climbing that might be easier in some ways, but still going for something big!
“Everyone has physical limitations in one way or another; it’s just one of those things. For me, cancer is more of a psychological than physical challenge.”
Dr Mike Leahy, consultant medical oncologist at The Christie, said: “Max is an inspirational young man with a great attitude. To hear that he was rock climbing a sheer face in Yosemite Valley, California and spending the night on the rock, not long after having his leg amputated didn’t come as any surprise. He has remained amazingly positive throughout his treatment.

“I think it is important to empower patients and give them the control to make decisions about their healthcare where possible. Unfortunately Max’s cancer has returned and he has recently opted to start a clinical trial as part of his treatment: which is another indication of his positive approach to his situation.”

Although Max’s future is uncertain now the cancer has returned, he has already planned another big adventure for next spring.

Max concluded: “I have a great relationship with my consultant and he gave me lots of freedom to make decisions about my treatment. This approach has helped me deal with everything cancer has thrown at me. I’m now ready to get on with my next phase of treatment and have planned a white water rafting trip in India for next summer.”