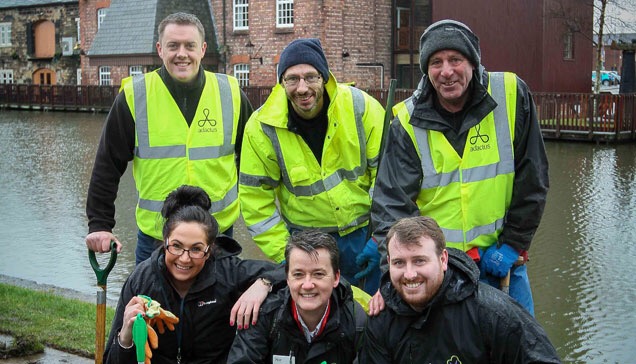 A new campaign has been launched in Leigh, aimed at using the canal system as a catalyst for regeneration. It will benefit businesses, create new work opportunities, new homes and a thriving and healthy community where people can live, work and play.

Launched by local MP Andy Burnham and supported by Wigan Council, the Canal & River Trust and the Bridgewater Canal Company, it is part of the council’s plans to focus on the town as part of its wider Waterfront Improvements Plan.

Mr Burnham is the chair of a working group of councillors and officials, the Trust, The Peel Group (who own the BridgewaterCanal), Groundwork Trust, housing groups and local businesses who all recognise how vital the canals are to the local area and community.

The Leeds & Liverpool and Bridgewater canals meet in the centre of Leigh, and the campaign aims to highlight their importance to the town and capitalise on their potential benefits to local businesses, housing and health and wellbeing.

The canals and their historic waterside buildings are seen as crucial to the area’s regeneration with a number of major developments already in the pipeline which will increase the town’s appeal to investors.

The launch of the campaign took part during a day of action when volunteers helped to spruce up the canal with a litter pick, graffiti removal and bulb planting. These environmental improvements are all aimed at increasing the profile of the canal as a leisure facility, promote healthy lifestyles and to promote volunteering and community involvement.

Mr Burnham said: “We have a great opportunity to use our fantastic waterways to help us to regenerate Leigh and to provide a great place for local people to visit. The local community, including residents, businesses and schools can play a vital part in improving the area and we rely on people being willing to get involved.  A canal festival is being planned for later in the year and this should be a great event.”

Wigan councillor David Molyneux said: “Leigh and its waterfront have a bright future.  There are ambitious plans to develop new homes and businesses around the canal bringing more jobs to the area and a new marina will open later in 2015 increasing tourism in Leigh.”