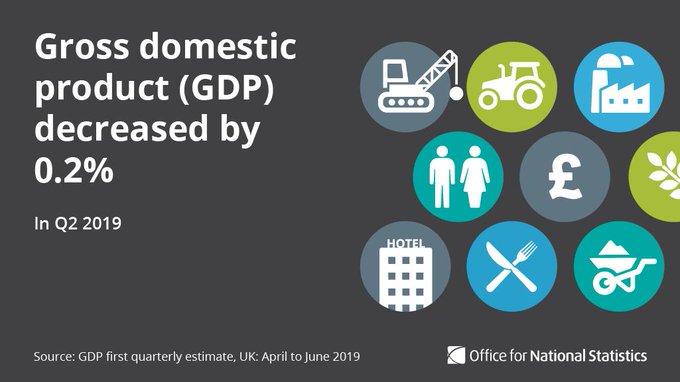 The UK economy shrank by 0.2 per cent n the second quarter of this year in the first fall in GDP for over six years.

Figures released this morning from the Office of National Statistics show that Brexit uncertainty and the motor industry are the biggest causes with manufacturers winding down stocks that were built up prior to the UK’s original departure date of the 31st March.

“The contraction in economic activity over Q2 is concerning, but much of this is due to a number of one-off factors.

“Growth has been pushed down by an unwind of stockpiling and car manufacturers shifting their seasonal shutdowns.

“Nonetheless, it’s clear from our business surveys that underlying momentum remains lukewarm, choked by a combination of slower global growth and Brexit uncertainty.

“As a result, business sentiment is dire.

“Securing a Brexit deal before the October 31 deadline is the first step to revving up the economy. The second is re-focusing attention on vital domestic priorities – such as pressing ahead with key infrastructure projects – to boost productivity and growth potential over the longer-term.”

“Today’s dismal economic figures are a direct result of Tory incompetence. The Tories’ Brexit bungling, including Boris Johnson now taking us towards no-deal, is breaking the economy.

“The Tories are responsible for tumbling business investment and stagnating productivity – and that, along with nine years of austerity, has contributed to GDP contracting today.