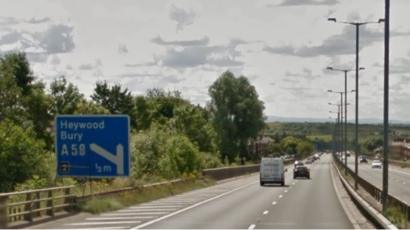 A pedestrian was killed last night after being hit by a car on the M66 near Bury.

The man was pronounced dead at the scene.No arrests have been made.

The southbound carriageway was closed for a number of hours but has now been reopened.

Constable Nicholas Corlett, of GMP’s Serious Collision Investigation Unit, said: “This is a devastating incident for all involved and our thoughts are with them as our investigation continues.

“Our enquiries are in their early stages but we believe several people witnessed this collision and might have dash cam footage or information that could assist us.

“If this is you or you were on either side of the carriageway at around 8.15, please contact us as soon as possible.”