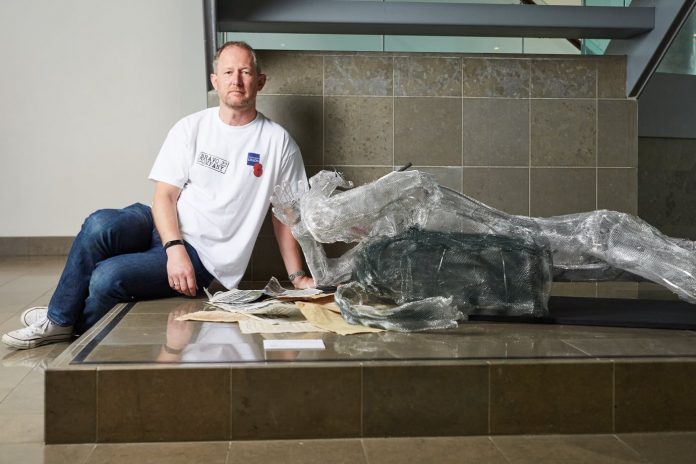 A remarkable sculpture made by a local military veteran has been delivered to Bury Art Museum to highlight the work of a group of service personnel from Greater Manchester.

It is part of an exhibition which has recently completed a two-week run at Salford’s prestigious Lowry Hotel. Stewart Hill was part of a Royal British Legion project using art to aid recovery from complex post-conflict conditions.

Stewart took up art after brain injuries caused by shrapnel caused him to retire from the Forces, where he was a Lieutenant Colonel. Bravo 22 Company is the Royal British Legion’s recovery through the arts programme for the Armed Forces community.

The 12 participants worked under the guidance of professional sculptor Al Johnson. She said: “This has been a really exciting opportunity to take part in a creative project making life-size sculptures, and to then share these very personal pieces with the public at an exhibition at the Lowry Hotel. It has been life-changing for some of them.

“Each of the sculptures is unique to its creator and tells a different story of recovery; from a painful memory to worries about civilian life or injuries that can’t be physically seen.”

The veterans, who have all been sourced by the Legion, had just four weeks to create their pieces.

Alison Bunn, Greater Manchester Area Manager for the Royal British Legion, said: “Through art, the project aims to improve participants’ self-awareness, confidence, self-esteem and motivation to help to move them along their individual recovery pathway. They are given a platform to express themselves, through art.

“This is just one of the ways we are using your donations to help support our Armed Forces community in Greater Manchester.”

Actor Ray Winstone, patron of The Art of Recovery project, said: “Bravo 22 helps wounded, injured and sick Service personnel, along with veterans and family members, on their path of recovery through theatre or art. It’s an awesome project.”

As the nation’s largest Armed Forces charity, The Royal British Legion is committed to helping Service personnel, veterans and their families live on to a more hopeful future and, through campaigns and projects such as this, they provide a voice to the Armed Forces community.

The sculpture will be on display at Bury Art Museum until the end of September 2017.