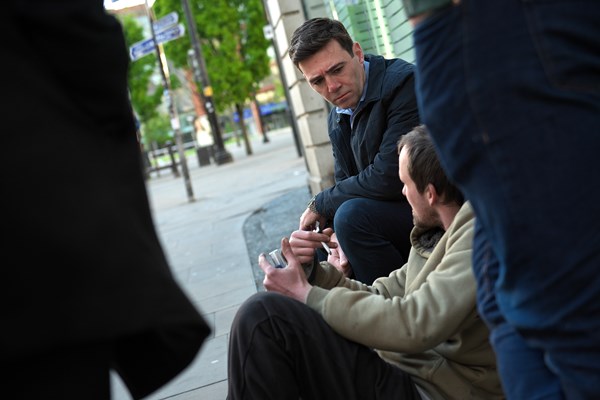 Andy Burnham, The Mayor of Greater Manchester, has challenged the main party leaders to commit to taking immediate steps to tackle the homelessness crisis and save lives this winter.

Last year, an estimated 726 homeless people died in England and Wales, many of whom will have slept rough on our streets.

In a letter to party leaders, the Mayor has outlined a number of actions which could make a real difference in addressing the humanitarian crisis across the country.

These include ending the freeze on the Local Housing Allowance with immediate effect once the new Prime Minister takes office, to ensure it keeps pace with the increase in local rents and ending no-fault evictions and announce this in the first Queen’s Speech.

The Mayor said: “More than 700 homeless people died last year but this human tragedy has not had the attention it deserves in the General Election campaign.

“In this day and age British people should not be dying on our streets for want of a roof over their heads. So today, I have written to party leaders about immediate steps a new Prime Minister and government should take to save lives this winter.

“Thousands are volunteering their time to help homeless people and before casting their votes people need to know that the party leaders will take action to tackle homelessness and rough sleeping.

“Here in Greater Manchester we have made great progress in reducing the numbers of people sleeping rough on our streets but much more needs to be done at national level.

“Homelessness shames our society and our duty to care for all citizens. We need a government that will listen to what is needed and deliver on commitments to end rough sleeping.”

National homelessness charity Shelter estimated earlier this year that rates of rough sleeping across England and Wales have increased 165% since 2010. However, Greater Manchester has bucked the trend with the number of people sleeping rough declining for two successive winters, following eight previous years of increases.

Masterplan for Leigh gets council approval