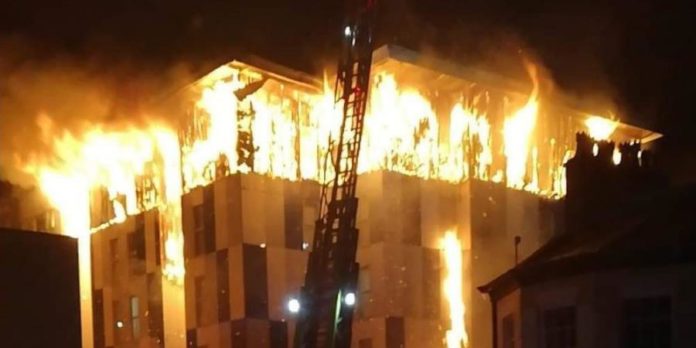 The Greater Manchester Mayor, Andy Burnham is calling on Boris Johnson to give families living in tower blocks with cladding “peace of mind” and says he’ll be asking the Government for more money to remove flammable cladding from buildings.

It is not yet known when the students will be able to get back into their homes but work is ongoing to assess the safety of the building and access will be reviewed on Monday say Greater Manchester fire chiefs.

In the meantime, the University has short, medium and long-term plans in place to support and accommodate students. Catering provisions and accommodation is in place for all evacuated students. If students need any

A GMFRS spokesperson said: “We’re pleased to say that contact has been made with the 220 residents that were registered to the building.

“Once again I want to thank all our partners for their continued support and in particular the firefighters who responded swiftly and immediately evacuated the building and rescued two people.

“Understandably people in high-rise buildings will be worried about the safety so we have advice on our website for Greater Manchester residents living in high-rise buildings. Our advice is to find out the evacuation strategy for their building, which should be clearly displayed in the building – if it isn’t then you should contact your landlord or managing agent.”

An online appeal to raise money for students who’ve lost their possessions in the fire has raised almost £9k.

The appeal’s been launched by The Greater Manchester Disaster Relief Fund, set up by Forever Manchester in the wake of the Manchester Arena attack.

the FIre Brigades Union (FBU) has called for a complete overhaul of UK fire safety and condemned cuts to fire and rescue services.

“My congratulations go to the crews on the ground who did amazing work in incredibly difficult circumstances. This terrible fire highlights the complete failure of the UK’s fire safety system.
“It’s deeply troubling to see fire spread rapidly up a building’s exterior again – a shocking indictment of the government’s shameful inaction after Grenfell. This is not how any building should react to a fire in the 21st century, let alone a building in which people live.
“We need to end the deregulation agenda and the disastrous cuts to our fire and rescue service. It’s time for a complete overhaul of UK fire safety before it’s too late.”
Les Skarratts, FBU North West executive council member , said:

“Firefighters on the ground have worked tirelessly to contain the fire and rescue residents. There will clearly be some hard lessons to learn as the circumstances become clearer in the coming days.
“Greater Manchester has lost more than 600 firefighters since 2010 alone and, alarmingly, Andy Burnham is trying to cut another six fire engines, including one in Bolton.
“We need to stop the senseless cuts to our fire and rescue service before we see another awful incident like this.”