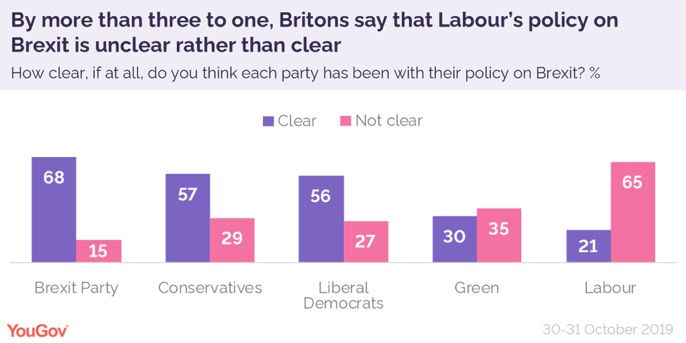 YouGov’s latest polling shows that 70% of Britons see Brexit as the most important issue facing the country.

However its latest research shows that two thirds of Britons are unclear about Labour’s Brexit position, with only 21% thinking it has been clear.

Most 2017 Labour voters (57%) find the party’s stance unclear, as do almost 65% of Remainers. Corbyn’s persistent non-committal stance on the issue seems to have done little to clarify Labour’s intentions.

In comparison, just 29% are unclear on Conservative Brexit policy. Most Britons (57%) think that Conservatives have been clear about their stance and this is even higher among Leavers (71%).

The Brexit Party is, unsurprisingly, viewed as having a clear Brexit policy (68%).

This view is also shared by the majority of Remainers and Leavers (74% each). Nearly three in five (56%) Brits also think that there is an overall clear Liberal Democrat Brexit policy.

As well as Brexit, clarity about Labour policy also falls short of the Conservatives in all other policy areas that were asked about

Healthcare is typically an area where the public think Labour fares better than other parties, but even here the results indicate that the public is confused about the party’s policy stance. Nearly half (45%) think Labour NHS policy is unclear, compared to just 20% who believe they have a handle on it.