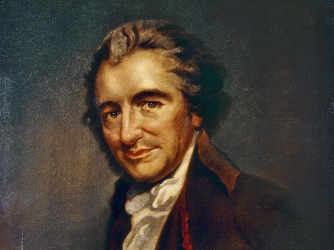 Manchester-born writer Trevor Griffiths will be among the speakers at an event to mark Thomas Paine’s birthday which will take place at the Working Class Movement Library on Saturday 27 January, starting at 1pm. This event is free and has been organised by the WCML and the Mary Quaile Club.

Thomas Paine (1737-1809) took part in the American War of Independence and the French Revolution. His ideas in works such as Common Sense, The American Crisis, The Rights of Man and The Age of Reason were enormously influential on the British radical movement of the late C18th and early C19th. Pursued by the government, he had to flee from Britain to France and never returned, ending his days in the USA.

In the 1820s radical groups in Manchester and elsewhere celebrated the birthday of Thomas Paine with dinners, songs, poems and toasts to “the immortal memory of Thomas Paine”.

Bernadette Hyland said, “ Thomas Paine once wrote “These are the times that try men’s souls”. In 2018 we think his ideas about a Republican democracy are as relevant now as they were 200 years ago.”

Trevor Griffith, is the author of a play about Thomas Paine, These are the Times, which was staged at the Globe Theatre in 2009. It was also broadcast on the radio. Trevor’s work for television, film and the theatre from the 1970s onward includes Occupations, All Good Men, Through the Night, Comedians, Reds, Food for Ravens and the series Bill Brand (1976) which starred Jack Shepherd as a left-wing Labour MP.

The other speakers are

There will also be a display of Paine-related material from the Library’s extensive collection.

Advance bookings for places may be made by emailing: maryquaileclub@gmail.com

Beat the Parents as Families are Welcomed to The Crystal Maze Live Experience this...