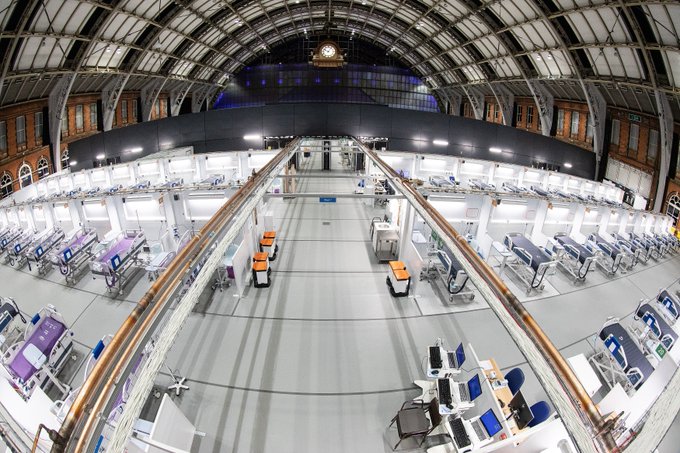 In a recorded message the Duchess said:

“In creating this Nightingale hospital, you have truly brought light to a dark time. But this is not surprising. Manchester is a past master at bringing light to dark times.

“After all, this is not the first time you have shown the world what it is to meet a great challenge with even greater resolve.

“My husband and I visited Manchester in 2017, shortly after the terrible bombing, and were deeply moved and inspired by the city’s courage and unity.”

Some patients have already been admitted as the hospital opens on a gradual and safe basis over the coming days and weeks.

Modelling in the North West predicts that the peak need for the highest-level critical care beds can be met by existing hospitals if the new hospital provides additional capacity for lower-level care. The NHS Nightingale Hospital North West will provide both oxygen therapy and general medical care for COVID-19 patients who do not need critical care, and can look after up to 750 patients at full capacity. Patients will be transferred from the North West’s hospitals’ critical care units and wards directly to the new hospital.

The new temporary hospital is one of seven Nightingale hospitals to be set up around the country as part of a massive NHS effort to respond to the greatest global health emergency in more than a century.

“Building this hospital in just a couple of weeks has taken the determination and boundless energy of people from many organisations who have come together to ensure our NHS has the necessary capacity during the pandemic, in what is an unprecedented response to an unprecedented crisis. We have many people to thank for their efforts including the NHS, the army, the fire service, police, Network Rail, construction partners, Manchester Foundation Trust, Manchester City Council and of course the Manchester Central Convention Centre itself in which the hospital is based. Thank you too to the many local businesses which have provided goods and services to help us get up and running.

“We now need to focus our efforts on providing the best possible care for our patients, and continue to support the hospitals in the North West to save lives.

Dieting and weight worries on rise in teens