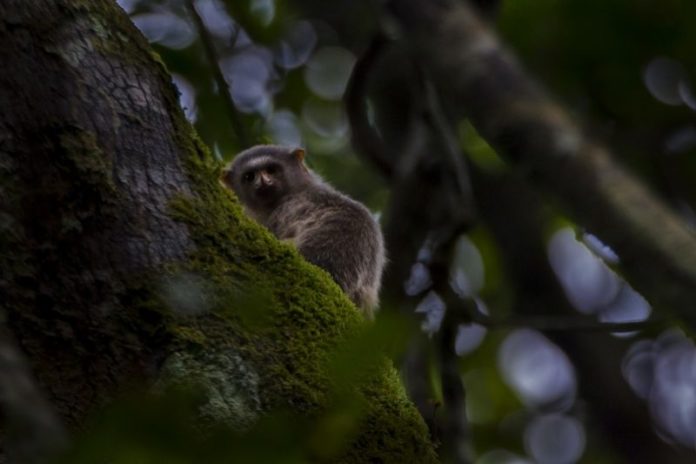 A SPECIES of monkey discovered by President Theodore Roosevelt is vulnerable to extinction due to deforestation in Brazil, according to a University of Salford PhD student.

A study looking at the Mico marcai, a species of largely unobserved Marmoset, found during the Roosevelt-Rondon Amazon Rainforest expedition in 1914, has aimed to assess its conservation status for the first time.

The species has been considered data deficient for many years due to limited information being available about its conservation status. However, University of Salford student Felipe Silva has discovered new evidence about the Mico marcai, highlighting the perilous consequences of funding cuts for conservation in Brazil.

The Brazilian president has generated much controversy by his apparent dismissal of environmental concerns, putting the future of huge swathes of the rainforest under threat of development and destruction.

Using data from field surveys, Felipe and fellow Mamirauá Institute for Sustainable Development researchers were able to pin-point the Mico marcai geographical range, estimate its population, and identify the main threats to its long-term survival.

Their findings showed that, despite the relative abundance of Mico marcai, habitat loss is likely to reduce its overall population by 30% in less than two decades, suggesting that the species should be listed as ‘vulnerable to extinction’.

This highlights the harmful threat posed by deforestation, but it also suggests there could be many unknown or poorly studied species in Brazilian Amazon, which could be placed in a threatened category.

Felipe said: “Unfortunately Brazil is now facing a dire scenario for environmental policies and conservation. After successive funding cuts for science and environment by the outgoing government, the proposals for development and economic growth put forward by the president elect will further weaken environmental policy in Brazil. This process has already started with proposed law changes and constitutional amendments, which will make it easier for big infrastructure projects to be passed, threatening this unique habitat.

“We present data that support the Mico marcai species as vulnerable. Due to the current scenario of uncertainties of the environmental and social politics for the Brazilian Amazon Rainforest, we are drawing the attention of researchers, media and society to the importance of research and investment in conservation of biodiversity in that region.”

Marmosets are generally 20cm in size and feed mostly on plants, fruit, and insects. As the Mico marcai has remained a mystery for many years, much is still unknown about the species.