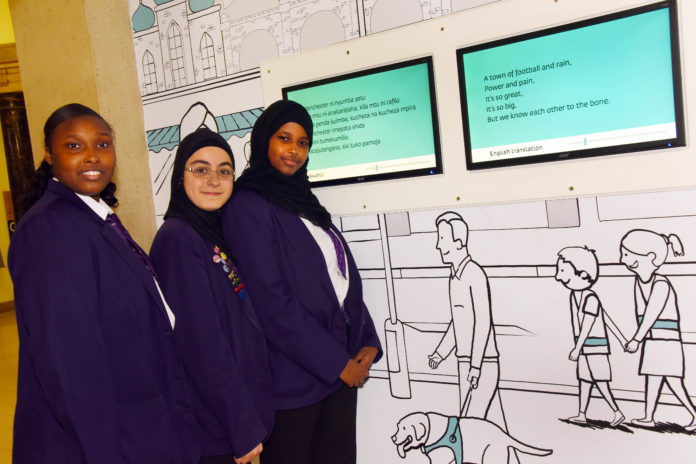 A brand new multi-lingual poem incorporating an incredible 64 different languages and written mostly by school children, takes pride of place from this week in Manchester Central Library for the next year.

Local school children and community groups have been invited over the last year to add new lines to a poem ‘Made in Manchester’ written by local poet Zahid Hussain.

What makes the poem unique however is that the youngsters and others were all asked to contribute lines written in their own heritage language, to highlight the cultural diversity of the city – a city that is proud to be called home by people speaking more than 200 different languages.

The finished poem in all its multi-lingual glory is now on display in Manchester Central Library – where it is being shown for the next year alongside an English translation of it.

The two versions of the poem – the multi-lingual original and the translated English version – will be displayed on two screens next to each other, that scroll in tandem through the poem, with one screen scrolling through the original version and the second screen through the English translation.

A short film featuring an abridged version of the poem read in their own languages by some of the young contributors has also been made and is now available on-line after being premiered at the launch of the poem earlier this week.

The idea for the poem originated from a conversation between poet Zahid Hussain and Councillor Luthfur Rahman, Executive Member for Skills, Culture and Leisure.

They wanted to find a way of showing just how diverse and yet how united the city and its different communities are.  In a city where at least 200 different languages are spoken every day it seemed a perfect fit to show this diversity using the power of words and language.  And so, after collaborating with partners at Manchester Libraries, Manchester Metropolitan University, Multilingual Manchester, University of Manchester, Manchester City of Literature, Read Manchester, and the council’s own translations department, and with support from Arts Council England, the ‘Made in Manchester’ poem was born.

An amazing artwork sculpture installation with a ‘Made in Manchester’ theme has also been created as part of the exhibition at Central Library featuring paper silhouettes of each other’s faces made by pupils from paper with the poem printed on it.

After being on display for the next year, it’s intended that the poem will be passed on to Manchester Metropolitan University’s brand new Poetry Library – due to open in 2020 – where it’s hoped the poem will continue to be added to with more languages, just as the number of languages spoken in the city continues also to grow.