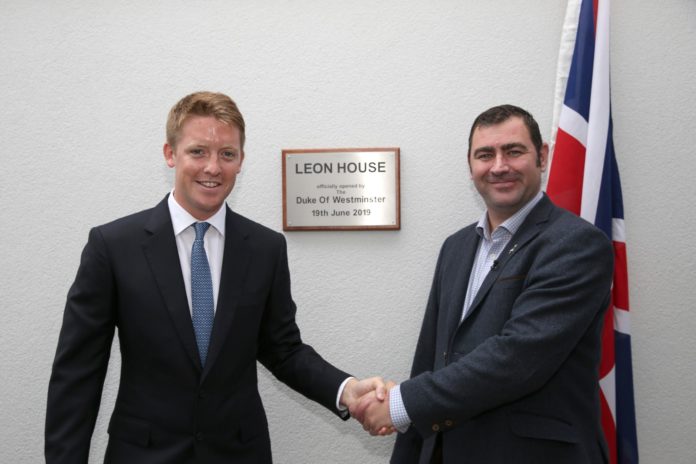 A brand-new facility for armed services veterans has been opened by The Duke of Westminster, providing life-changing support for those battling addiction and mental health issues.

Leon House, funded solely by large corporates and with assistance from Step Forward Homes, will support ex-army servicemen and women battling addiction, including gambling and alcohol dependency and those suffering from mental health issues such as PTSD.

The Not-for-Profit, 23-bed facility in Prestwich, Manchester, will be a refuge for those admitted to the clinic, providing a crucial lifeline and helping veterans to get back onto their feet.

Leon House is completely free of charge to those it cares for and supports, taking referrals from GPs, army charities and other related professionals.

The clinic was officially opened by The Duke of Westminster, whose Foundation is working to address issues that lead to homelessness and mental health problems. The Duke was invited to the facility by Colonel Andy Reid MBE, a long-term supporter of Leon House. Colonel Reid lost both his legs and his right arm after stepping on an IED whilst serving with the 3rd Battalion The Yorkshire Regiment in Afghanistan in 2009. He astounded people with his recovery, spending just two weeks in hospital before returning home. The Duke knows Andy well through his role as an Ambassador for the Defence National and Rehabilitation Centre.

Speaking at the opening, The Duke of Westminster said: “Through my work with the Westminster Foundation I know how important it is to support people in confronting their mental or emotional challenges, as well as their more practical ones, such as finding a roof over their head. Leon House provides a great balance between having a space to call your own and enabling a place to share experiences, good and bad.”

Colonel Reid supports several charities and acts as an ambassador to companies including JMW Solicitors, with which Andy is working to encourage soldiers to seek help following injury, ending the ‘man up’ culture that continues to dominate and raising awareness around advice, support and securing financial payments.

The plight of army vets is close to his heart, having seen ex-colleagues struggling to transition to civilian life and battling mental health issues as a result of their experiences while serving with the army. He was personally able to help one man with whom he served alongside, and whom Andy credits with saving his life in Afghanistan. Having left the army in order to spend more time with his child, Alex, 28, found himself homeless as a result of PTSD, even attempting to take his own life. Andy reached out to Alex, paid for him to travel up to Manchester and supported him in getting his life back on track.

Colonel Reid MBE said: “Leon House will quite literally save lives – there are so many men and women who struggle with mental health issues and related problems including addiction after leaving the armed forces mainly due to the experiences they’ve had and the things they’ve seen. We know that support for veterans is woefully inadequate – and that’s across the board, really, from housing through to mental healthcare – so places like Leon House and organisations like Step Forward Homes play a big part in closing the gap.

He continued: “Leon House will be a lifeline for so many veterans in need of a helping hand. I’m really pleased to be able to support the team here, and I’m grateful to the Duke of Westminster for taking the time to come down today and lend his support.”

Deliveroo announces new partnership with BP and Marks & Spencer, and introduces delivery of...