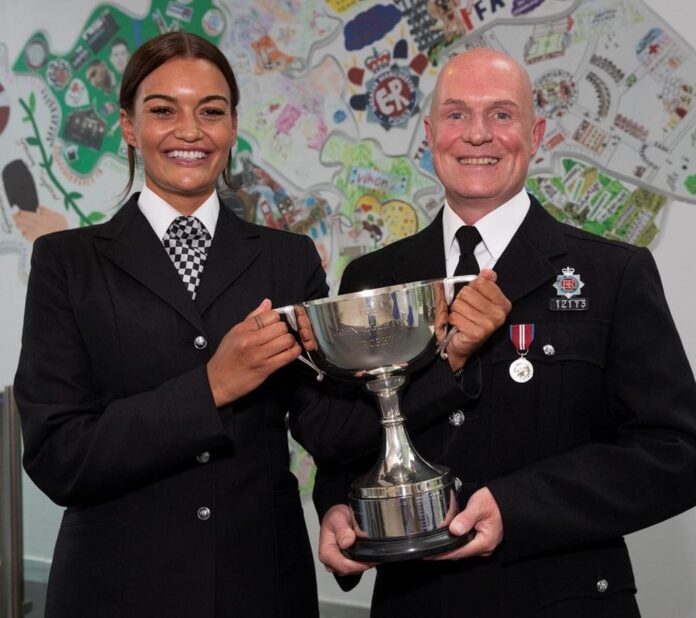 Two Greater Manchester Police officers who arrested a dangerous man armed with knives and a meat cleaver have been nominated for The National Police Bravery Awards.

In March 2021, PC Simon Toft and PC Alicia Snowden attended a call from a pharmacy in Woodley where they said an armed robbery was in progress. A man had entered the premises in possession of a hammer, and was threatening staff with a knife. A further call was received that the man had left the pharmacy and had assaulted a member of the public while she was sitting in her car.

Further calls were then received that the same man was now inside Woodley Medical Centre, in possession of an axe and several kitchen knives. He was threatening to stab staff and had also thrown a chair through the window of the surgery.

PC Toft had no time to brief PC Snowden, who had just finished her first five weeks of tutor phase with PC Toft.

Arriving at the scene, PC Toft updated the control room and drew his Taser. Upon seeing PC Toft, the man walked towards him calmly, holding a metal bar with a heavy metal base attached to it. The man lunged at PC Toft to throw the metal bar.

The officer quickly responded with his Taser, but due to the thickness of the man’s clothing, one of the probes did not make contact with his skin. The man ripped out the wires of the Taser and went to grab the metal pole again.

Without hesitation, PC Snowden ran towards the male and kicked the pole and base out of the way while continuing to shout instructions to him. The male was Tasered several times, as he was still reaching for knives that had fallen out of his pocket and was also trying to grab a meat cleaver that was in his backpack.

Eventually PC Snowden was able to put handcuffs on the man, while still giving him firm and clear instructions.

PC Snowden arrested the man and further patrols attended to assist. The man has since been remanded by the courts in prison.

Greater Manchester Police Federation Chair Stu Berry said: “This was a real team effort, which enabled the quick arrest of the subject and ensured nobody got injured.

“This was a dangerous, dynamic and escalating situation and for Alicia in particular it was so soon into her service as a police officer. She deserves high praise for how she handled her self and her actions that day. As does Simon – for both his outstanding police work and how he cared and guided his colleague.

“We are very proud of them and they are worthy nominees.”

The National Police Bravery Awards honour officers from across England and Wales who have performed outstanding acts of bravery while on or off duty.

As nominees, PC Toft and PC Snowden will attend an awards ceremony in London on 9 December.

The National Police Bravery Awards are sponsored by