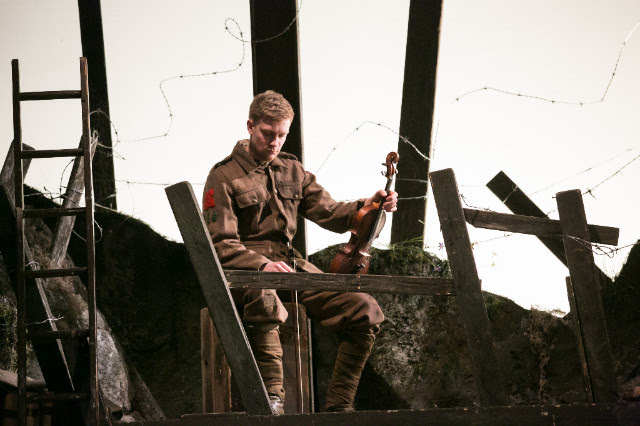 In the final year of the commemorations for the First World War, Rachel Wagstaff’s highly acclaimed adaptation of Sebastian Faulks’ best-selling novelBirdsong embarks on a final UK tour with dates at The Lowry Tue 3 – Sat 7 April.

Birdsong tells a mesmerising story of love and courage, before and during the war. In pre-war France, a young Englishman, Stephen Wraysford, embarks on a passionate and dangerous affair with the beautiful Isabelle Azaire that turns their worlds upside down.  As the war breaks out, Stephen must lead his men through the carnage of the Battle of the Somme and through the sprawling tunnels that lie deep underground.  Faced with the unprecedented horror of the war, Stephen clings to the memory of Isabelle and the idyll of his former life as his world explodes around him.

Sebastian Faulks said, “This is the fourth and final tour of Rachel Wagstaff’s adaptation of my novel and, as it coincides with the centenary of the Armistice in 1918, it comes with an additional air of celebration. The play has had a long life since its first incarnation in the West End in 2010 and audiences have always been warm and appreciative. I very much hope that this finale will be a glorious one.’’

Rachel Wagstaff is currently co-writing two screenplays with Sebastian Faulks, one for Eleventh Hour Productions, and one for Trademark Films with Bob & Co.  ‘Flowers For Mrs Harris,’ a new musical written by Rachel and Richard Taylor, staged at the Crucible, Sheffield, received five-star reviews and won the UK Theatre Award for Best Musical Production 2016.

In the same year, ‘Only The Brave,’ for which she wrote the book, opened at the Wales Millennium Centre.  Rachel adapted Sebastian Faulks’ novel, ‘The Girl at the Lion d’Or,’ for Radio Four (Woman’s Hour), and ‘When I Lost You,’ an Afternoon Play for Radio Four, co-written with Duncan Abel.  In development are stage plays with The Original Theatre Company and Wales Millennium Centre, and an original Sherlock Holmes stage play, co-written with Duncan Abel, for Tony Marion Productions.

Sebastian Faulks’ latest novel, ‘Where My Heart Used To Beat,’ is published by Hutchinson.