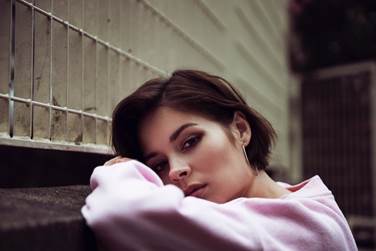 Nina Nesbitt’s recent tracks ‘The Best You Had’ and ‘The Moments I’m Missing’ demonstrate a huge leap forward from her Top 15 debut album ‘Peroxide’.

Demonstrating a command of modernist pop and R&B-tinged sounds which she blends with her own confessional songwriting, they’ve both been embraced by fans including Hollywood royalty in the shape of Chloë Grace Moretz and Taylor Swift, who included ‘The Best You Had’ on her ‘favourite tracks’ Spotify and Apple playlists. Under a new deal with Cooking Vinyl, these two tracks alone count for over 25 million of her 85 million streams to date.

Now Nina Nesbitt builds on that upward trajectory by sharing her new track ‘Somebody Special’, which was premiered last night on Zane Lowe’s Beats1. Written in Nashville with Dan Muckala, ‘Somebody Special’ is a love song with a twist – it’s about a relationship which inspires someone to rediscover their own self-worth and potential. It sounds like a global smash: all slowly percolating verses, taut rhythmic grooves and a chorus you want to live inside.

“Somebody Special is about when you’ve been feeling a bit low and then you meet this person who changes everything,” explains Nina. “It’s about those first few months where everything you do together feels so exciting. You could be sitting in a dive bar drinking cheap cider, driving about in a broken down car, or sitting at home in your tracksuit, but you somehow feel like you’re having the best time because the feeling of falling in love sugar coats everything.”

Having grown-up in a small village just outside Edinburgh, Nina Nesbitt enjoyed a whirlwind of success with the ‘Peroxide’ album, but she was soon ready to move on. An organic evolution, her 2016 track ‘Chewing Gum’ was the sound of her breaking out of her comfort zone and indulging fully her love of pop. Her desire to challenge herself continued with the low-key ‘Life in Colour’ EP which found Nina writing emotional and sometimes dark stories that were inspired by experiences which fans had sent to her.

Still only 23-years-old, Nina Nesbitt has found a way to make it work for her in an industry that often doesn’t give you the time to settle into the artist you want to be. Rather than rush into making another album for the sake of it, she waited for the inspiration to strike and let it slowly take shape organically. What she excels at is being an artist, but one that’s fully in control – the very best kind.

Nina plays  Manchester, Club Academy on the 19th May 2018