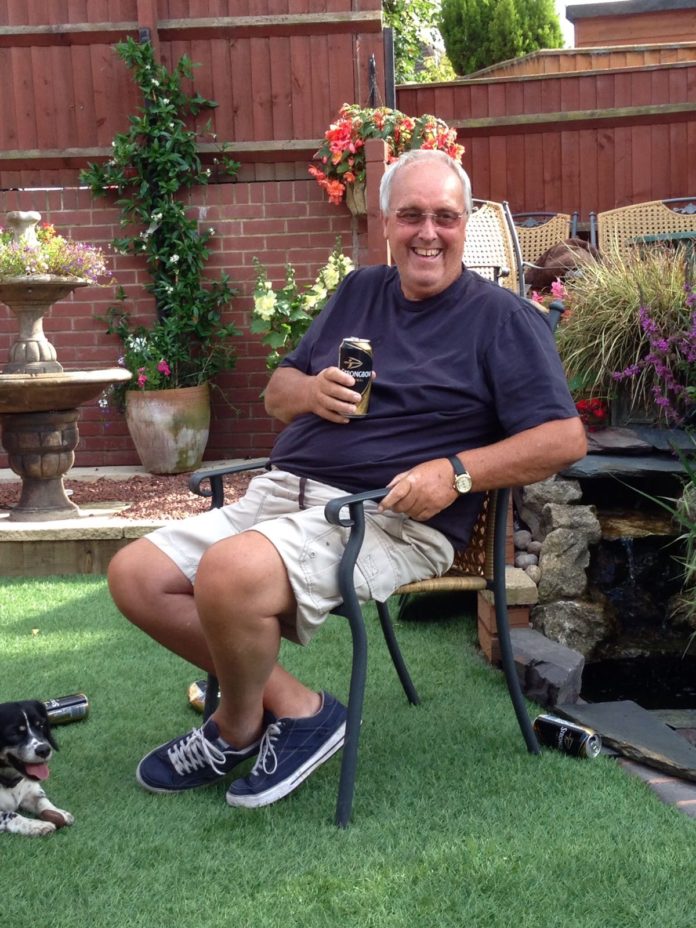 A brother and sister, who lost their dad to a brain tumour, will take on a 10-mile military-style obstacle race, to raise money to help find a cure for the disease

On 8 September 42-year-old Emma Brignano, from Eccles in Manchester and her brother, 36-year-old John Whitehead, a self-employed builder from Staffordshire, will attempt Tough Mudder Classic North West 2019 at Cholmondeley Castle near Malpas in Cheshire, to raise money for the charityBrain Tumour Research. They were inspired to sign up, having lost their dad Chris Whitehead to the disease in November 2016.

Chris, from Rugeley in Staffordshire, was a veteran of the British Army’s Coldstream Guards, who later became a policeman. He died just six weeks after his diagnosis with a high-grade brain tumour, aged 73.

Mum-of-one Emma, a business development manager with Floorbrite in Sale, said: “John and I had our dad whipped away from us within weeks of him being diagnosed with a brain tumour. We watched the strongest man we knew whittle away before our very eyes. It’s been just over two years but it doesn’t get any easier. There’s not a day that passes when John and I don’t think about our dad for one reason or another.”

“Dad previously had bowel and bladder cancer but survived both, returning to good health. The cancer specialists were amazed at his strength! When he got the brain tumour, however, he went from being a big, strapping bloke to wasting away to nearly nothing, in such a short space of time. During his last few days I never left his side. He lost the ability to speak and to swallow; it was awful.”

Emma and John will be among thousands of gutsy competitors taking part in the extreme endurance event. The infamous course is not for the faint-hearted; comprising twenty-five physically challenging obstacles, based around mud and water, over ten miles. Last year Emma’s son Zane Brignano, seven, and his cousin and John’s son Bobby Whitehead, nine, took part in the children’s’ version of Tough Mudder, ‘Lidl Mudder’. The one-mile course is jam-packed full of obstacles to give kids the chance to work as a team, while getting muddy.

John said: “Bobby and Zane lost their beloved Grandad to this awful disease and they were really keen to get involved with fundraising. Research into brain tumours is drastically underfunded. As a family we want to do our bit to help improve survival rates for this deadly cancer.”

Emma’s a keen member of S&P Gym in Trafford and has galvanised her fellow gym-goers to support her and John. Forty of them are due to come along to the event, wearing Brain Tumour Research colours (bright pink!), to cheer them on.

Matthew Price, community fundraising manager for Brain Tumour Research in the North said: “Emma and John deserve huge congratulations for taking on such an epic challenge, which will undoubtedly inspire others to fundraise for Brain Tumour Research. Their amazing efforts have helped to raise awareness of this cruel disease. Their story reminds us of the dreadful impact brain tumours have on families.

“Brain tumours are indiscriminate; they can affect anyone at any age. What’s more, historically less than 1% of the national spend on cancer research has been allocated to this devastating disease. We cannot allow this devastating situation to continue.”

Brain Tumour Research funds sustainable research at dedicated centres in the UK. It also campaigns for the Government and the larger cancer charities to invest more in research into brain tumours in order to speed up new treatments for patients and, ultimately, to find a cure. The charity is calling for an annual spend of £35m in order to improve survival rates and patient outcomes in line with other cancers such as breast cancer and leukaemia and is also campaigning for greater repurposing of drugs.

To donate to Emma and John’s fundraiser, go to https://www.justgiving.com/fundraising/emma-brignano2

Class of 92 University is given the go ahead