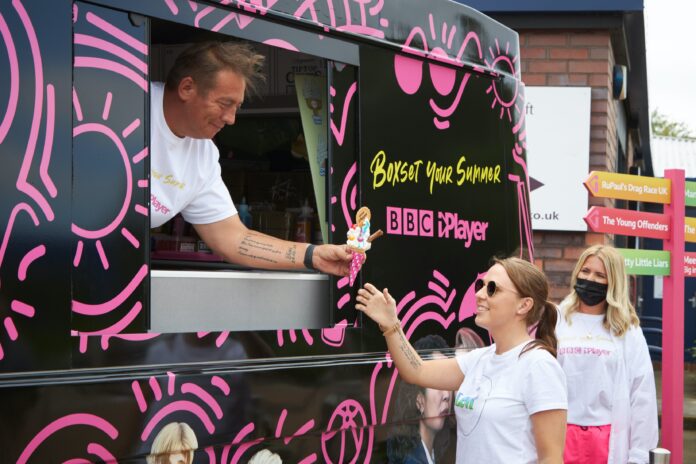 Boxset fans can grab a free ice cream in Manchester this Wednesday, thanks to a promotional campaign from BBC iPlayer, and choose from a range of boxset-themed flavours, including ‘The OG Ice Queen’, an edible glitter-topped ice cream inspired by RuPaul’s Drag Race UK, or a Meet The Khans-based ‘Knicker Boxer Glory’, running red with raspberry syrup.

BBC iPlayer is bringing free ice creams to Manchester as part of its Boxset Your Summer campaign, to spread the word about the wide range of fantastic shows it has available to binge. For a limited time from 12pm on 28th July, the iPlayer ice cream van will be on New Cathedral Street handing out free delicious ice creams.

Each flavour has been inspired by one of the great boxsets available to watch on BBC iPlayer this summer. Fans of This Country can try the ‘Couple of Screwballs’ flavour of gum balls and bubblegum sauce, while those who fancy a classic 99 plain with flake can try the ‘One and Cone-ly’ flavour, inspired by Normal People. And for those who want a proper treat there’s ‘Life is Sweet’, inspired by the Angels of the North, which is covered in marshmallows.

The iPlayer ice cream van will be visiting New Cathedral Street in Manchester for a limited time from 12pm on 28th July. As well as a free ice cream, visitors can get their picture taken with their faces in place of Conor and Jock from The Young Offenders and enjoy some of iPlayer’s best soundtracks to really set the scene.

Sea Life and Legoland to get new attractions thanks to investment

Mandela Trilogy heads to The Lowry this September