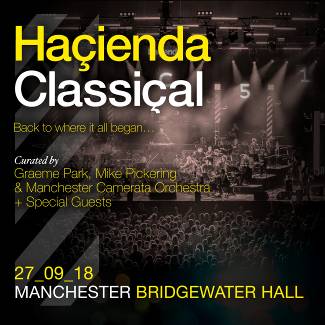 Hacienda Classical comes back to Manchester’s Bridgewater Hall where it performed its debut concerts for a one off celebration on Thursday 27th September.

Hacienda Classical is to return to where it’s incredible journey started out a little over two years ago for a very special celebratory concert at Manchester’s prestigious Bridgewater Hall on Thursday 27th September.

Going back to where it began, since those early concerts the much acclaimed Hacienda / orchestra hybrid has sold out the best venues across the UK as well as taking signature slots at the most high profile festivals including Isle Of Wight and Glastonbury.

Now well into its third year, with the set revised each year by DJ’s Graeme Park and Mike Pickering, conductor Tim Crooks and exec producer Peter Hook, the first live shows of this year have seen great reactions for 2018 new set as the show moves forwards and evolves.

The brand new soundtrack features many new additions of classic tunes to the Hacienda Classical repertoire but the Bridgewater Hall performance, itself the closest venue to the original club promises for a very exciting and exclusive evening.

About the night, Graeme Park commentated “I’m delighted to be returning to the Bridgewater Hall in Manchester where our epic Haçienda Classical journey began on a cold February night in 2016. What was supposed to be a one-off show is  now into its third year. We’ve learnt a lot and developed the show to make it bigger and better then ever, so its thrilling that we’re going back to where it all began and just a stone’s throw from the original site of The Hacienda. This will be something special indeed.”

Tickets for this limited capacity event go on sale / Friday 6th July 9AM at gigsandtours.com & the venue box office at bridgewaterhall.co.uk

In addition to the Bridgewater Hall dates, Hacienda Classical also has around  a dozen dates upcoming over the year including prestigious festivals including its Edinburgh Festival debut in August, venues and its first international concerts.

In its first dates abroad, Hacienda Classical has been invited as part of the 40th Anniversary celebrations of KKL Luzern to Lucerne Switzerland in August and in its current final gig of the year, it performs at Dubai Opera in Downtown Dubai in November.

Hacienda Classical has already fully sold out its returns to London’s Royal Albert Hall and Manchester Castlefield Bowl in 2018 for the third year in a row.   The show also makes its first appearance at Edinburgh Festival in August and returns to Leeds’ First Direct Arena at the end of September.

Sister Sledge will be performing live on stage at Manchester’s Victoria Warehouse with the...

A summer of Music at Chetham’s