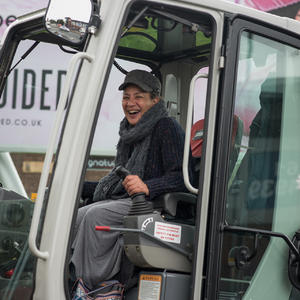 Archeologists from the University of Salford will be digging back to the 1970s music scene at Manchester’s former Reno Club.

They will be joined by volunteers, including former club patrons, as part of an unusual history project to uncover what remains of the funk and soul nightspot.

Sarah Jane Cattell, who teaches archaeology at Salford, said: “Archaeology isn’t all Romans and Tudors, we are increasingly involved in recent history, which proves particularly fascinating when it involves living people digging back into their own memories.”

The basement nightclub, renowned for its rare musical repertoire of US imports, opened in 1962 and was initially used as a Salvation Army hostel for African seamen. Later it became an iconic venue as a sanctuary from the prejudices of 1970s and 80s for people of mixed race, until its demolition in 1986.

Linda Brogan, a playwright and regular at the Reno club in the 1970s, began the project in 2016 to recover memories and allow people to reclaim the cultural pride of that period. She has already has launched a website featuring video interviews with people with a functional or emotional attachment to the club.

The 57-year-old, who first attended the Reno in 1976 aged 16, says her memories are still strong: “I knew these people for ten years but I now realise I didn’t really know them, there was a lot that we didn’t know about each other.

“When we were younger we acted cool and had our own persona but now it’s interesting to find out more about people’s lives.”

Early excavation at the vacant site at the corner of Princess Road and Moss Lane East, found much of the club remains intact, and the walls and much of the dance floor still in place.

The full dig on the land, which also covers the site of the former Nile reggae club, is being carried out by the Centre for Applied Archaeology and volunteers are welcome to get involved.

The community dig will be running from the 11th to the 27th October (excluding weekends) Volunteers can book for up to 3 days.

To book a place please email s.j.cattell1@salford.ac.uk. All welcome regardless of experience, although any children taking part must be accompanied by an adult.

Once the dig is complete, the exhumed site will be transformed into a theatrical art installation, with a candlelit backdrop, soul music and photo projections.

A new market for Eccles