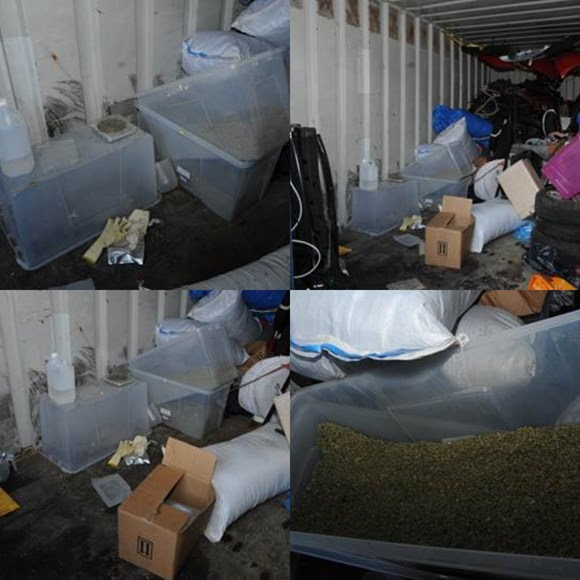 A man who went on the run from police has been jailed after officers discovered he had produced more than £1million worth of cannabinoids – better known as ‘Spice’.

Matthew Styles,34of HMP Preston but previously from Oldham, was jailed on Friday ( to 11 and a half years in prison for a catalogue of drug related offences at Manchester Minshull Street, Crown Court.

Since the law changed to categorise Spice as a Class B drug in December 2016, officers launched an operation around anti-social and drug-related activity in Piccadilly Gardens, which had seen a significant rise at the time.

In early 2017, while under surveillance, Styles was seen at a shop where he purchased marshmallow leaves which are used in the production of spice.

He was also spotted under surveillance at a shipping container in Middleton, which officers searched on 8 December 2017.

In the container, officers discovered 1.5kg of cannabinoid powder, acetone and 70 kilos marshmallow leaves, as well as the equipment needed to produce Spice.

Police then searched Styles’ home and found a delivery note for a package from China, which was used to import the cannabinoid to make Spice. Styles’ numerous phones also proved his involvement in supplying Spice across Manchester and importing the materials needed to produce it.

Over the course of the investigation it was established that Styles’ had purchased enough marshmallow leaf to produce 647kgs of spice which would have a street value of around over one million pounds.

He failed to attend court in 2018 and following work by detectives, it was discovered he had fled the UK using a hire vehicle to travel through the Channel tunnel into France and subsequently into Spain.

He was assisted by Keith Pritchard,58,of Brigsteer Walk, Collyhurst, who hired and drove the vehicle out of the UK and arranged for the purchase of the travel tickets.

Pritchard was arrested on his return to the UK in December 2018 and Styles was later arrested in the UK on 19 August 2020. They were both charged with conspiring to pervert the course of justice and pleaded guilty in April 2021. Pritchard was jailed for 18 months for his part.

Police given runaround as youths in silver Renault megane rampage across Trafford last...