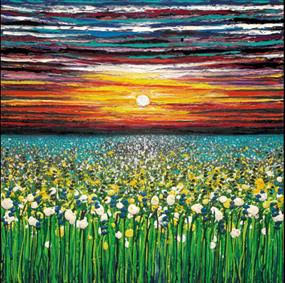 A collection of poignant paintings will be on display at Manchester Central Library from this week to mark the anniversary of the end of World War One.

Telling an immersive story of the soldiers who fought and fell between 1914 and 1918, The Danger Tree exhibition will run from Friday 12th January until Saturday 31st March. A selection of pieces from the body of work will also be available to view at Castle Fine Art on King Street during this time.

The Danger Tree was created by art duo Scarlett Raven and Marc Marot as a tribute to the Newfoundland Regiment which, under orders from British Command, used a tree halfway into No Man’s Land to assemble. The German artillery caught on, leading to many casualties, and the tree later became known as The Danger Tree.

Scarlett Raven’s collaboration with Marc Marot has led her to be the first oil painter in the UK to delve into the world of augmented reality. Whilst her paintings appear conventional at a first glance, Augmented Reality allows the viewer to unlock the creative journey of each painting with their smartphone, stripping away the countless layers of paint and revealing the deeply personal process beneath every piece through poetry, animation and music.

One piece in the collection, entitled The Bloodsuckers, focuses on Captain Charlie May. Charlie was a journalist for the Manchester Evening News before going to battle and this led him to become a copious diary keeper.

Scarlett and Marc were given access to Charlie’s diaries in a local museum in Ashton-under-Lyme in order to bring the painting to life. They came across a passage written as a letter to his wife and daughter at home, which read: “The thought of not seeing you or our darling baby again turns my bowels to water.”

Charlie died on 1st July 1916 on the disastrous opening day of the Battle of the Somme, just two weeks after writing the diary entry.

Councillor Rahman, culture lead for Manchester Central Library said: ‘’The Danger Tree paintings created by Scarlett and Marc are truly symbolic, and the methods used to bring each piece to life are astounding.

“We’re looking forward to opening the exhibition at Manchester Central Library to recognise those who lost their lives and hope that it will help our visitors to understand and remember a crucial moment in history.”

Scarlett Raven said: “It’s a privilege to be bringing The Danger Tree to a venue as iconic as Manchester Central Library.

“This exhibition is particularly poignant as we mark 100 years since the end of conflict, and I want to give the centenary due recognition.

“I’m inviting people to view painting in a completely different way and hope that viewers will engage with the work beyond the canvas, beyond the wall and beyond the library. I want each piece to become an event in itself – a very personal and intimate event.”

Deeds Not Words – an evening with Helen Pankhurst at the People’s History...

Paraorchestra heads to Manchester with ‘Minimalism Changed My Life