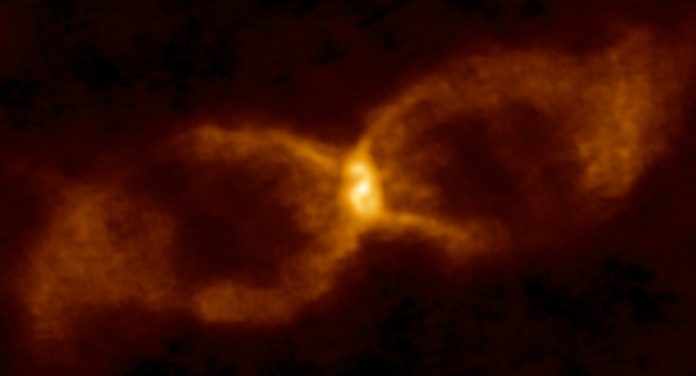 Researchers from The University of Manchester are part of an international team of astronomers that has identified a collision between a white dwarf and a brown dwarf star for the first time.

The previously unexplained astronomical event was first witnessed on Earth by French and Polish astronomers nearly 350 years ago in 1670, when it flared up to briefly be among the brightest 100 stars on the sky.

It was thought to be the formation of a new star, or Nova. It disappeared from view afterwards. This so-called ‘new star’ was long referred to as ‘Nova Vulpeculae 1670’, and later became known as CK Vulpeculae. A remnant nebula was discovered in 1982, but the star itself is now invisible even with the largest telescopes.

What also made this particular cosmic event unique is the resulting explosion left an hourglass shaped formation in the night sky. Modern astronomers have since disregarded the nova theory, however they’ve also struggled to explain what caused the stellar explosion that left the ‘hourglass’ shape in the stars.

It was initially thought to have been triggered by the merging of two main-sequence stars – stars on the same evolutionary path as our Sun.

But by studying the debris from the explosion – which takes the form of dual rings of dust and gas, resembling an hourglass – this latest research has concluded that a brown dwarf – a so-called failed star without the mass to sustain nuclear fusion – had merged with a white dwarf.

The international team used the Atacama Large Millimeter/submillimeter Array (ALMA) telescope in Chile and its UK ALMA Regional Centre Node (UK ARC Node) at Jodrell Bank at The University of Manchester to observe and analyze debris from the explosion to unravel the mystery.

Professor Albert Zijlstra, from The University of Manchester’s School of Physics & Astronomy, co-author of the study, explains: “Stellar collisions are the most violent events in the Universe. Most attention is given to collisions between neutrons stars, between two white dwarfs – which can give a supernova – and star-planet collisions.

“But it is very rare to actually see a collision, and where we believe one occurred, it is difficult to know what kind of stars collided. The type we believe that happened here is a new one, not previously considered or ever seen before. This is an extremely exciting discovery.”

Dr Adam Avison, also from Manchester’s School of Physics & Astronomy is a support astronomer in the UK ARC at Jodrell Bank. He worked closely with the international team to analyze the data and was surprised by what was uncovered.

He added: “I was immediately struck by the hourglass structure of CKVul when we first got the images loaded up on the screens. These ALMA observations have given us an insight into the inner regions of CKVul at levels of sensitivity and resolution not possible with previous generations of telescopes.

“The detail we are seeing, of both the ‘hourglass’ and particularly the central disc, have allowed us to uncover an incredibly rare event and help explain how CKVul came to be as we see it today.”

This hourglass formation was triggered when the brown dwarf star was “shredded” and “dumped” onto the surface of a white dwarf star, leading to the 1670 eruption and the hourglass we see today

Professor Zijlstra explains: “Many of the heaviest elements we know, such as uranium, platinum and iodine are made in such collisions. The shell around CK Vul has some very strange elements, such as a form of radioactive aluminium. This suggests an unusual type of thermonuclear explosion.

“We think that the brown dwarf will have disintegrated. Some of it burned up in the thermonuclear explosions that were triggered on the white dwarf, and some of it was thrown out. The jets formed probably from a rotating disk around the white dwarf, containing the remnants of the shredded brown dwarf.”

The team was made up astronomers from European, American, and South African institutions including workers from the Universities of Keele, Manchester, South Wales, Arizona State, Minnesota, Ohio State, Warmia & Mazury (Poland), and the South African Astronomical Observatory.

5 Crucial Tips For Trading Bitcoin In 2020