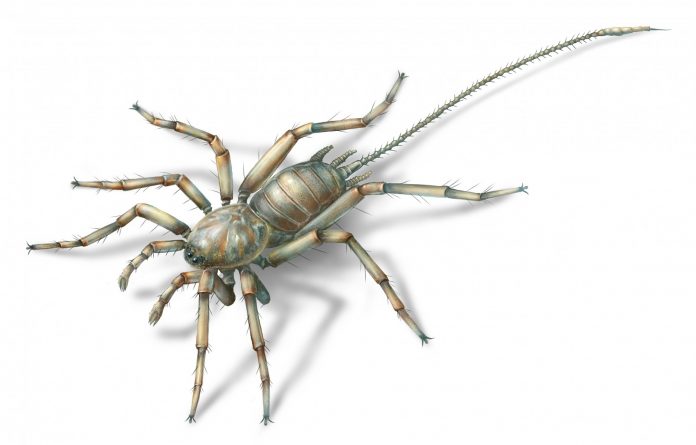 The common traits of spiders are well known to everyone – they have eight legs, multiple eyes and can spin webs – but a recent fossil discovery and new research now shows that spiders once had long ‘whip-like’ tails.

An international team of researchers has been investigating an ‘extraordinary’ 100 million year old fossil of a new species called Chimerarachne yingi found in Myanmar. The fossil is extremely well preserved in Burmese amber, and dates back to the Cretaceous period, when the likes of Tyrannosaurus rex, Velociraptor and Triceratops walked the earth.

The team says the specimen is potentially a transitional fossil: one that belongs to a group of extinct arachnids which were very closely related to true spiders. But what makes the fossil so unique, and different to spiders of today, is the fact it has a tail. The discovery sheds important light on where modern spiders may have evolved from. The research is being published in Nature Ecology and Evolution.

Spiders are one of nature’s success stories with more than 47,000 living species. Over hundreds of millions of years they have evolved several key innovations found only in this group. These include spinnerets for producing silk for webs (as well as for other purposes like egg-wrapping), a modified male mouthparts, unique to each species, which are used to transfer sperm to the female during mating, and venom for immobilizing prey.

The researchers, led by Bo Wang from the Chinese Academy of Sciences and including Dr Russell Garwood from The University of Manchester, says Chimerarachne yingi closely resembles a member of the most primitive group of modern living spiders – the mesotheles. These spiders have a segmented abdomen unlike other groups found today, such as the mygalomorphs, which include well known spider species like tarantulas and funnel-webs. Mesothelae spiders are only found in China, Japan, and Southeast Asia today.

Dr Garwood, from Manchester’s School of Earth and Environmental Sciences, added: “Based on what we see in mesotheles, we also would have expected the common ancestor of spiders alive today to have had four pairs of spinnerets, all positioned in the middle of the underside of the abdomen. Chimerarachne only has two pairs of well-developed spinnerets, towards the back of the animal, and another pair that is apparently in the process of formation.”

The team analyzed the fossil using a range of different techniques. One of Dr Garwood’s roles in the study was to help work out where this fossil sits in the evolutionary tree of the arachnids. He added: “Perhaps the most interesting aspect of the new fossils is the fact that more than 200 million years after spiders originated, close relatives – quite unlike arachnids alive today – were still living alongside true spiders.”

One thing the team doesn’t know is what the tail would have been used for or if the spider was venomous.

Co-author, Dr Jason Dunlop from Museum Für Naturkunde in Berlin, added: “We don’t know whether Chimerarachne was venomous. We do know that the arachnid ancestor probably had a tail, and living groups like whip scorpions also have a whip-like tail. Chimerarachne appears to have retained this primitive feature.”

“Taken together, Chimerarachne has a unique body plan among the arachnids and raises important questions about what an early spider looked like, and how the spinnerets and pedipalp organ may have evolved.”

Despite its appearance the team says Chimerarachne is not a direct ancestor of modern day spiders. Spider fossils go back even further to the Carboniferous, more than 300 million years ago. Instead Chimerarachne belongs to an extinct lineage of spider-like arachnids which shared a common ancestor with the spiders, some of whom survived into the mid-Cretaceous of Southeast Asia.