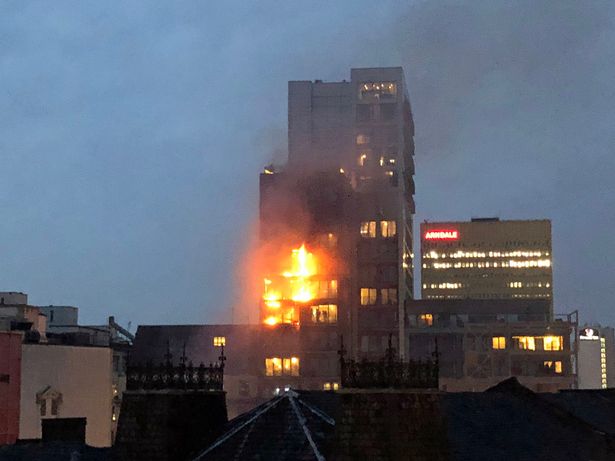 More than 50 firefighters responded to the incident which broke out at 4pm on Saturday, December 30 at a high rise building in Joiner Street, Manchester. Crews responded quickly to the incident and tackled the blaze which started in the open plan kitchen area of a ninth floor residential apartment.

Crews worked in challenging conditions to extinguish the fire which had spread to the wooden balconies on several floors.

The building’s fire alarm systems worked as they were designed to do with a smoke detector warning the occupant of a fire, who then evacuated. When the building-wide communal fire detection subsequently activated, it initiated a call to the fire service and triggered the safety features of the building installed for firefighting.

Since the incident, crews and specialist officers have thoroughly checked the 20-storey building. Inspections have established that the building’s integrity and safety is suitable for the majority of people living in the apartments to return to their homes.

Landlords have arranged alternative accommodation for the residents of the seven apartments affected on the ninth floor. As an additional precaution and reassurance measure, GMFRS specialist fire safety officers are working with the managers of the building to instigate a phased evacuation process for any future incidents as an interim measure.

Officers inspecting the building have concluded that the cladding systems did not contribute to the fire, and the fire spread is down to the external timber balconies adjoined to each apartment. Inspections have also detailed that the construction of the building does meet the national building regulation requirements.

Deputy Mayor of Greater Manchester – Crime, Policing, Criminal Justice and Fire, Beverley Hughes said: “Firefighters and officers that attended the incident at the weekend dealt with an incredibly challenging fire that was rapidly changing. Crews were faced with very difficult and harsh conditions but their fast intervention prevented further fire spread.

“The speed of the response and the fire safety expertise of our crews involved was exceptional and enabled them to tackle the fire rapidly and safely. I would like to thank all the crews who worked hard with council officers and the building owners to reoccupy affected residents, minimising disruption.

“Following the Grenfell Tower tragedy, the Mayor set up the Greater Manchester High Rise Task Force to provide fire safety reassurance. This work is well underway and proactive inspections of all high rise premises have been carried out to ensure all buildings comply with fire safety regulations and people feel safe in their homes.

“I want to reassure the residents of Greater Manchester that learning from this incident will feed into this work and fire officers are working with local authorities and housing providers, in the public and private sector, to ensure that residents living in high rise buildings in Greater Manchester are safe.”

GMFRS have been in discussions with National Fire Chiefs Council and are seeking national guidance regarding wooden balconies on apartment blocks, and will consider if further fire protection is needed.

Councillor Bernard Priest, Deputy Leader of Manchester City Council, said: “The fire service deserve huge praise for their heroic work in tackling this fire which prevented this incident from becoming more serious than it was. We also welcome the constructive role the building’s owners CapitalClimb, and the management of the aparthotel, played both on the night and since.

“Senior officers and councillors have already met with senior fire service representatives and the building’s owners to discuss the incident and next steps.

“While the building met all national building regulations at the time it was built and its internal fire defences performed well in limiting the impact of the fire, we fully understand that people will be concerned about what was a very dramatic-looking incident because of the external spread of the fire. There are always lessons to be learned from this sort of incident – and the Council are determined to play our part to ensure they are – but there should be no cause for undue alarm.

“We want to reassure Manchester people, and particularly those living in high rises, that their safety is an absolute priority for us and Greater Manchester Fire and Rescue Service – as evidenced by the Council’s major investment in retrofitting sprinklers in all council-owned blocks – and we will support the fire service to ensure lessons are learned, as we would with any such incident. City centre councillors will also be meeting with residents of the Lighthouse building to provide reassurance and support.

“Incidents such as this also underline the ongoing need for landlords and tenants to be fire aware, including residents and visitors familiarising themselves with the fire alarm and evacuation arrangements where they are living.”

Fire officers will continue to work with the building managers to reassure and educate residents in the building block on what additional fire safety measures can be put in place to prevent another incident of this scale.

A spokesman for building owners CapitalClimb said: “We are satisfied following the fire officers report that the building performed as designed in the circumstances and we are relieved and thankful that no one was injured in the incident.

“We would like to recognise and thank all the emergency services and our onsite team who did a fantastic job in challenging circumstances.”