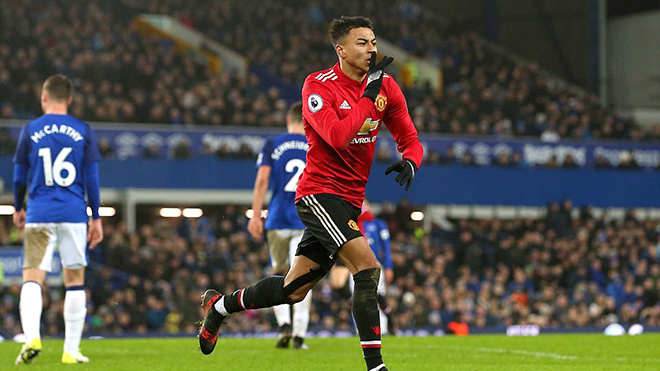 There has not been much to shout about for Manchester United fans over the festive period. Elimination from the Carabao Cup at the hand of Championship promotion hopefuls was just the start.

A nightmare week saw United play three times and only take three points from fixtures that they will feel they should have done substantially better in. A disastrous stretch of games which saw Manchester City disappear from Jose Mourinho’s sides sight in the title race.

However, in this dark period for the club Jesse Lingard has emerged as a shining light for his team. While others around him have struggled he has excelled and cemented his place in the side.

It has not been an easy ride to glory for the Warrington born attacker. Lingard signed for United, the team he supports, at the age of seven and has been at the club ever since. While he has left on loan he has always returned to Old Trafford with the desire to breaking into the first team.

Lingard’s first loan spell led him to Leicester in 2012. He made the move with then fellow United youngster Michael Keane. Leicester manager at the time Michael Pearson cited the pairs ability to add quality to the squad. However, Lingard failed to make an impression at the club and returned to Old Trafford in January only making five appearances from the bench.

A successful Australian pre-season tour in the 2012/13 campaign with Manchester United saw Lingard score twice in the first game, his first senior goals for the club. He added another two to his tally for the tour and finished as The Red Devils top scorer. His desire to stay at the club and fight for his place was not fulfilled as opportunities in the first team were limited.

It was arranged that Lingard would go out on loan to Birmingham City to bolster their attack. Birmingham had been keen on the youngster through the transfer period. The disappointment of being loaned out again did not deter the United youngster.

Although the initial agreement was for one month but was extended to January. Birmingham had no choice to extend Lingard’s stay as he started his term their in emphatic form. His debut came against Sheffield Wednesday and he scored all four goals in a 4-1 victory for the West Midlands club. He represented The Blues 13 times and scored a total of six goals.

He returned to Old Trafford, although Birmingham wished to extend the loan, but again failed to make his presence on the pitch known. An appearance on the united bench for a home game against Swansea was as close as he got before being sent out on loan again.

This time Lingard’s destination was Brighton. the attraction of the move was clear, The Seagulls were attempting to secure a play-off place and the experience would give Lingard experience fighting for success. 15 outings for Brighton returned three goals, including one against Derby in the play-off semi-finals, was seen as a success and when returning to his parent club Lingard publicly stated his excitement.

“I’ll go back to Old Trafford with sky-high confidence. Players out on loan have got to keep playing our own game and see where it takes us.” (Jesse Lingard)

Lingard again impressed in pre-season for The Reds. But once again it was not his time to shine at Old Trafford. Well it could have been. Louis Van Gaal had taken over at Old Trafford and clearly liked Lingard. He started the first game of the season at Old Trafford, his first competitive game for United, but had to leave the field after 24 minutes. He had sustained a knee injury which would keep him out until December.

It was a cruel blow for the player but again Lingard picked himself up. Seemingly out of contention again at Old Trafford he left on loan for a fourth time. This time to the club who he had faced in the previous years play-off semi-final, Derby County. Former United assistant manager Steve McClaren was the man in charge at Derby at the time and described the in coming loanee as an ‘exciting talent’.

The season was a poor one for Derby and Lingard struggled to perform. An eighth place finish for the Championship club was a failure as the team had reached the play-off final the previous season. Lingard scored twice in the 14 games he was involved in during this loan spell.

The 2015/16 campaign saw Lingard (finally) get his chance. In an indifferent season for The Red Devils, under Louis Van Gaal, there were some serious highlights for Lingard. Featuring 41 times in all competitions for United he scored seven goals and chalked up four assists. His first senior United goal came in a 2-0 home victory against West Bromwich Albion.

The stand out moment of the campaign, possibly not just for Lingard but also the club in general, was his stunning winner against Crystal Palace in the FA Cup Final. In the second half of injury time Lingard ran on to a partially cleared cross from Antonio Valencia and unleashed a first time right footed volley that was worthy of winning any football game.

Jose Mourinho arrived at Old Trafford replacing Van Gaal at the start of the 2016/17 season. It turned out to be an up and down season for Lingard. A goal in another final, the time the League Cup, saw United claim another trophy. Lingard featured in 42 games scoring five times.

This season seemed to be going the same way. A new contract gave Lingard a wage of £100k which received criticism from some fans on social media. The United manager defended his player.

“Jesse has been with the club since the age of seven, He has good intelligence which, when combined with his energy and ability, makes for a player with a great future ahead of him. Jesse is a popular member of the squad and I am delighted he has signed a new contract.” (Jose Mourinho)

Mourinho was proven correct. Lingard stepped up in late October when United traveled to Swansea for the fourth round of the League Cup. Scoring both goals in the 2-0 victory was a sign of things to come.

United’s recent struggles have seen them take nine points from a possible 15 and with Manchester City already racing ahead it has seemingly ended the Red’s title aspirations. In that period they have scored 10 goals and Lingard has been directly involved with half of those (4 goals and 1 assist). A second half doubled against Burnley salvaged his team a point in a disappointing outing. A game that saw him come off the bench to change the game. Then his wonderful strike against Everton has given everybody involved with the club hope going into the new year.

The future is indeed bright for Lingard. He has forced his way into the side and has to be guaranteed a starting spot. With the World Cup taking place this summer where Lingard will be hoping to feature heavily.

“He is such a threat, and he is probably a quicker runner with the ball than without the ball. He beats players, can score, is composed and can assist. His sheer enthusiasm, not just work on the ball in creating but off the ball defending (is impressive). For me, this season, he is the most improved player I have seen.” (Steve McClaren)

Praise continues to be heaped on Lingard and it is well deserved. There have periods in his career that could have demotivated him and led to him giving up on his dreams of playing for the club he has always been a fan of. He did not. The loan system does not often work for youngsters at top clubs in the Premier League but Lingard’s desire has driven him to where he wanted to be. Now he is a crucial member of the Manchester United team and he will be hoping to extend this excellent run of form.