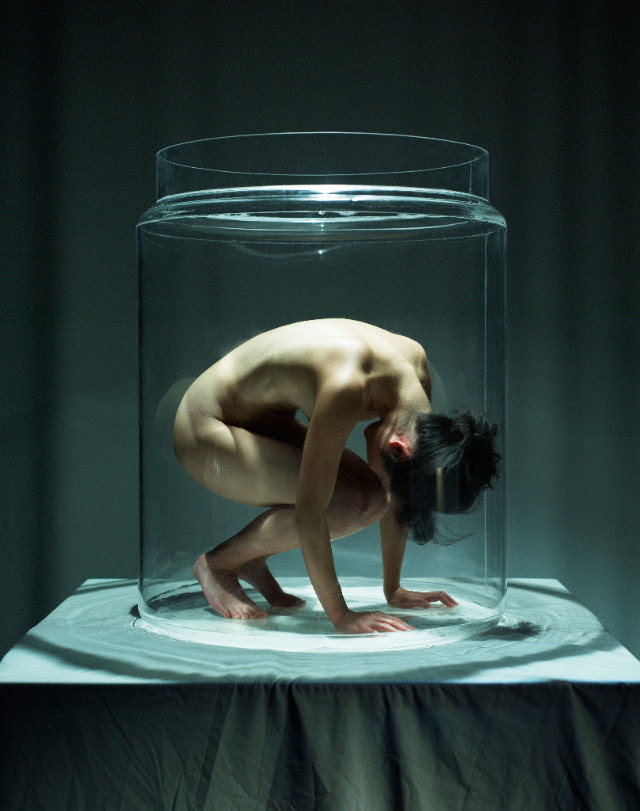 The medical gaze comes under the microscope as Clod’s immersive installationUnder Glass comes to The Lowry following its 2009 debut at Sadler’s Wells and award-winning Edinburgh Fringe run.

Under Glass is one of Clod Ensemble’s most iconic works, a distinctive promenade production which sits somewhere between immersive installation and staged performance. Originally commissioned by Sadler’s Wells, Under Glass has been described as a cross between a museum exhibit and a medical laboratory.

Audiences will be invited on to the stage to encounter seven glass containers holding eight performers.

Inside the containers the performers appear almost as specimens; a woman in a jam jar, a couple negotiating their space in a bed-like Petri dish, a shy ‘wallflower’ pinned behind a glass panel, a man clock-watching in his office, a woman on the phone in a test tube observing the disintegration of village life. The audience will be guided across the stage from container to container by lighting and sound describing moments of solitude.

Clod Ensemble is one of the UK’s most prominent performance companies who collaborate with dancers, actors, musicians, medics, architects and orchestras.

Under Glass comes to The Lowry Wed 18 – Sat 21 October as part of the Manchester Science Festival 2017 and is produced in association with Fuel, supported by the Wellcome Trust and Arts Council England.