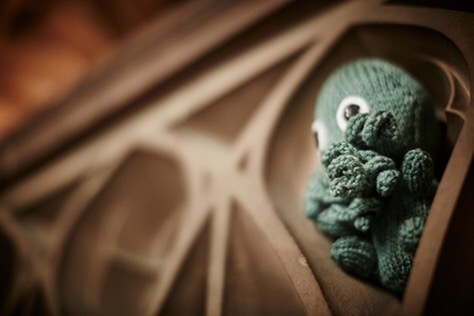 LIFE IN Manchester will be taking a turn for the weird this week with the start of the annual Gothic Manchester festival.
The festival is organised by the Manchester Centre for Gothic Studies, at Manchester Metropolitan University.

This year’s festival theme is “H.P.Lovecraft and the Weird”, and from Thursday, October 22, the city will be swamped with terrible monsters, terrifying tentacles and spooky storytelling.

Dr Linnie Blake, Director of the Manchester Centre for Gothic Studies at Manchester Metropolitan University, said: “The Manchester Centre for Gothic Studies is delighted to present the third Gothic Manchester Festival: an exploration and celebration of all that ‘lies beneath’ the everyday world. We will be delving into the dark subterranean and undersea worlds of weird literature and film and even exploring the underground spaces of the city itself. Year on year the Festival has grown in popularity and international renown, permanently embedding the gothic dimensions of Manchester as a city in the public mind whilst highlighting the dark expertise of staff at Manchester Met.”

An opening night party for an exhibition by Manchester Gothic Arts Group featuring John Hyatt will kick off the festival on Thursday, in the Holden Gallery’s café space.

Professor Hyatt said: “As Director of MIRIAD, it has been a great pleasure working on this project across the university with Helen Darby and colleagues in Humanities but it has also been a great experience working and networking, as an artist, with the city’s Manchester Gothic Arts Group. I have tried to avoid easy horror in my works for this exhibition. I would characterise my Manchester International Gothic series as ‘Dark Romanticism’.”

On Friday, October 23, from 3pm to 4pm, Dr Linnie Blake and Dr Xavier Aldana Reyes of the Manchester Centre for Gothic Studies will treat visitors to the John Rylands Library to an introduction to the historic works contained in the Eighteenth Century and Victorian Gothic literature cases. The event will explore the ways in which gothic writing opens a window on the darker side of these historic periods to illuminate the issues, tensions and anxieties of the age, and will include classic works by Horace Walpole, Ann Radcliffe, Mary Shelley, Edgar Allan Poe, Bram Stoker and Robert Louis Stevenson.

Later on Friday the John Rylands will host Twisted Tales of the Weird, an evening of readings by contemporary writers of Lovecraftian cosmic horror including M John Harrison, Helen Marshall and Timothy J Jarvis. Then for those who are too scared to go home, ArA club nights present TentaculArA SpectaculArA at Sacred trinity Church, on Chapel Street, with a special live performance from Glamogoth.

On Saturday, October 24, the third annual conference of the Gothic Manchester Festival adopts the theme “What Lies Beneath?”, at which speakers will present their work on the gothic’s darkest and most hidden aspects. Hosted at No 70 Oxford St, presentations include work on Lovecraftian Gothic and the weird, the dark dimensions of the human unconscious, the socially repressed, oppressed and occluded, the subterranean and the infernal, old gods and new monsters.

From 6pm on the Saturday, Manchester Metropolitan University’s Geoffrey Manton building will host a “Lovecraft in the 80s” double bill with two films inspired by the author, Reanimator and From Beyond.

On Sunday, October 25, Jonathan Schofield and Manchester Met’s RPG Society Vague will lead an underground mystery and mythos tour of Manchester from 11am to 12.30pm. In the dark and out of reach places of Manchester the dead come to life. Under the ancient stones of St Ann’s Square is a hidden undercroft electric with supernatural activity. Hear the story of the tragic opera singer, Madame Malibran, once the most renowned in Europe, learn the eerie tale of Dr John Dee, alchemist, and of the unfortunate William Rutter and the Pigman. This tour is conducted mainly in the dark so be prepared, after all, the history is real, the terror sudden.

For those who survive the walk, author Kit Cox will present A Brief History of Monster Hunting from 2pm to 4pm at the John Rylands Library. Kit will introduce the audience to the monster hunting world of Victorian man of arms, Major Jack Union, a real Van Helsing of his day, with Royal approval. Come hear the many recollections of his exciting tales of pursuing true Vampires through the Louisiana swamp lands or Deep sea fishing for the elusive Kraken and cunning Ghoti.

From 7pm on Sunday, October 25, Hold Fast Bar, on Newton Street, will host The Esoteric Order of Cocktails – Cthulhu Pub Quiz. The annual Gothic Manchester pub quiz will this year test participants’ knowledge of eldritch lore in an evening of questions on Lovecraft, weird fiction and the Cthulhu mythos, complete with squid ink cocktails.