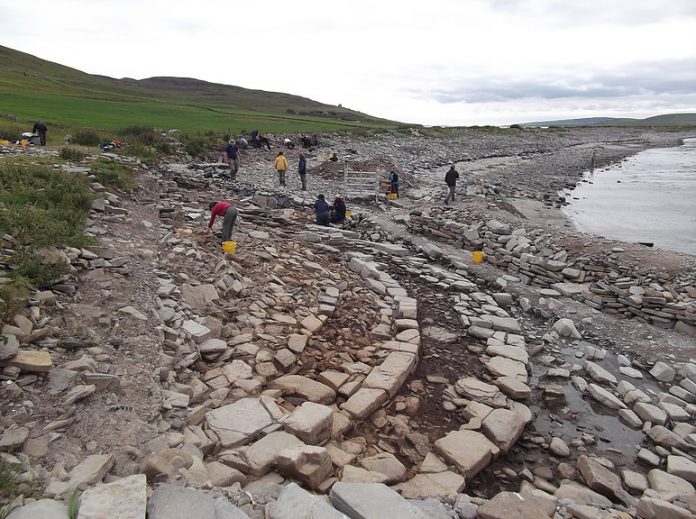 A group of archaeologists are working against the tide to excavate a Pictish copper smith’s workshop located on an Iron Age settlement on the Orkney Island of Rousay.

The site has revealed a sooty imprint of what is believed to be the smith’s hands and knees, which could potentially be 1500 years old. 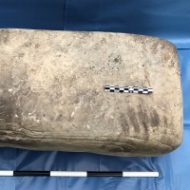 Dr Stephen Dockrill, Senior Lecturer in Archaeology, University of Bradford explains: “Analysis of crucible fragments and the floor deposits demonstrated that a copper smith worked in the building. The analysis of the floor enables us to say with confidence where the smith worked, next to a hearth and two stone anvils. The biggest surprise came when we lifted the larger stone anvil and cleaned it; we could see carbon imprints of the smith’s knees and hands.”

Dr Julie Bond, Senior Lecturer in Archaeology, University of Bradford added: “This is an extremely exciting find and we are doing all we can to gather as much information on the site before it is destroyed by the sea. A handprint is so personal and individual that you can almost feel the presence of the copper smith and imagine what it must have been like working in there all those years ago.”

The small cellular building, dating to a period between the 6th to 9th century AD, was semi-subterranean. It was entered via steps and a curved corridor, which would have minimised the amount of light entering the smithy, allowing the smith to assess the temperature of the hot metal based on its colour.

A door would have separated the workshop from the corridor. Many of the stone fittings – the pivot stone, door jamb and bar hole – remained intact. The centre was dominated by the hearth, with a set upright stone on the doorward side protecting the hearth fire from drafts. Scientific analysis at Bradford will reveal what was on the smith’s hands to produce the prints and explore reasons for their remarkable preservation.

The Pictish workshop is part of an excavation project directed by Dr Julie Bond and Dr Stephen Dockrill.  The site is being excavated by staff and students from the University of Bradford along with the City University of New York. The building is part of a substantial Iron Age settlement which is being destroyed by the sea. Work this year has centred on the Pictish workshop and a Neolithic Chambered Cairn which is also being eroded.

A History of Manchester’s Cremation Trends