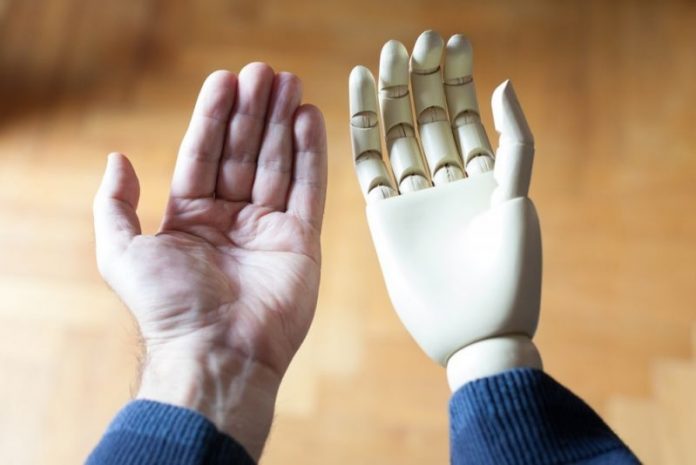 Researchers from the University of Salford have used new techniques to show that people with artificial arms and hands rely heavily on their intact limbs.

In the first major study of its kind, researchers used electronic sensors to look in detail at the daily activities of a group of people with one prosthetic hand over the course of a week.

Previously, clinicians have relied on data from self-reported questionnaires completed by prosthesis users about how they use their artificial limbs, but these are often unreliable.

Their paper, published in the journal Scientific Reports, confirms a widely held belief that prosthesis users relied heavily on their intact limb in their daily lives.

The research team leader Laurence Kenney, Professor of Rehabilitation Technologies at the University of Salford, said: “Although it has widely been suspected that prosthesis users have a tendency to rely on their intact arm, this is the first time that objective and detailed data has been produced to confirm this is the case.

“Relying too much on one limb may lead to overuse injuries, and our findings are consistent with reports that upper limb amputees are more likely to experience such problems.”

The group of prosthesis users were from a range of ages and included people who had been born without hands as well as those who had needed amputations.

Electronic sensors were placed on the wrists of both the prosthetic hand and the intact hand to measure continuous activities over seven days.

The technique gave researchers incredibly accurate data about how much they were using each of their hands, and the results were compared against a similar group of 20 people with both limbs intact.

The researchers found all of the prosthesis users showed an increased reliance on their intact hand, although they did find that those who had been using a prosthetic hand for longer did not rely on the intact hand as heavily.

They also looked at how long people were wearing their artificial hands during the day – as prostheses users sometimes choose not to wear their devices – but found there was no relationship between this and how much they relied on the intact hand.

This technique may eventually lead to better ways of supporting people who have been given prosthetic limbs.

Finally, the researchers also invited participants into the lab to study how well the prosthesis users performed on a simple pick and place task. The researchers found no relationship between measures of task performance with either the amount of time a prosthesis was worn, or the degree of reliance on the intact arm.

Professor Kenney said: “While further work is needed, our new technique allows clinicians and researchers to understand for the first time how people with prosthetic limbs actually use them in their day to day lives. This technique may eventually lead to better ways of supporting people who have been given prosthetic limbs.”

Back for good: piece of transport history returns to Rochdale