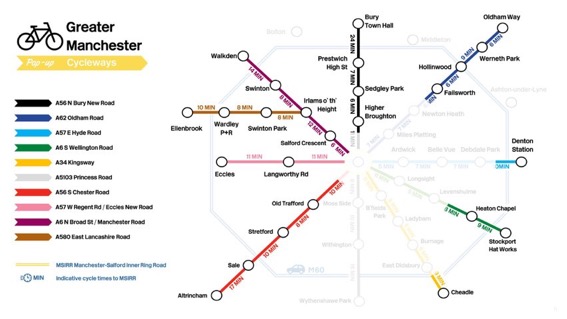 The proposals have produced anger among many people with Andrew Gwynne MP for Denton and Reddish arguing that the proposals iare endangering lives and potentially increasing air pollution. “Please think again!“ he asks the council.

“It makes no sense and is hugely disappointing. Seeking clarification and understanding.“

“According to our experience, light segregation devices of temporary nature raise serious safety concerns in respect to ability to protect cyclists and other vulnerable road users (remember temp wands on Sackville St?)
(and what about right turns on junctions)” and adds

“The evidence points to the need for neighbourhood improvements, rather than pop up temporary cones for commuter cyclists down major routes which take capacity from public transport and don’t form part of an integrated transport network”

However one critic replied that

This is a joke. What are “neighbourhood improvements”? When are they happening? Why can’t we also have pop up cycle lanes? Why is Manchester City centre different to almost every other city in the world that have decided pop up lanes are the way to go?

Greater Manchester’s Cycling supremo Chris Boardman has also been drawn into the argument defending his role in the proposals and taking to Twitter to explain the issues involved with bringing together different local authorities on the issue.

Right. Lots of people pushing for details on Greater Manchester’s emergency active travel measures, details of which will be released this coming week,” he wrote. “But there’s a few things people should know.

“My job as Commissioner is to come up with ideas, present options, coordinate where requested and aid those who want to enable people to travel actively.

“It is not my job to dictate what happens, I don’t have control of the roads, and nor should I, that burden rests with the people you have elected to make those decisions.

“Whether you agree with those decisions or not, you should keep in mind these actions have consequences that those responsible are accountable for and it’s a tough job.

“So be thankful for those who make brave decisions that perhaps align with your views. But be courteous to those you don’t agree with.

“If it goes well, councillors will get little thanks, if it goes wrong they will be criticised. Remember that.

It’s a thankless not very well paid job considering  it’s one of the most important in our country. I certainly wouldn’t want to do it.

“So whilst I might not agree with all of the decisions being made around me, I do appreciate those that have had the courage to stand up and be accountable,” he added. “I hope you will too.”