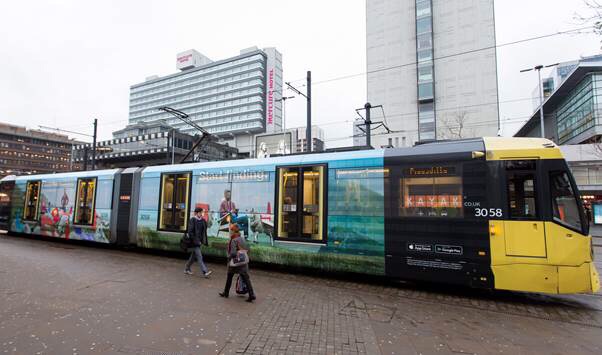 KAYAK.co.uk, the travel search engine, has deployed the first ever commercial tram wrap on Manchester’s Metrolink with Exterion Media – Europe’s largest privately held Out-of-Home (OOH) advertising business.
Planned and booked by Blue 449 and Kinetic, the campaign will be running across Greater Manchester’s Metrolink network from 6th January 2016 for 6 weeks, reaching key stops throughout the city centre and surrounding districts.

With the aid of its mascot sheep and the strapline: “Stop searching. Start finding on KAYAK.co.uk”, the campaign ‘dominates’ the tram with a creative that showcases how KAYAK searches hundreds of travel sites to help you find and book the flight or hotel that suits you best.

Loella Pehrsson, Regional Director UK, Ireland and the Nordics at KAYAK, said: “Here at KAYAK, we promote travel planning and what better way to do this than with OOH – a medium that captures audience attention when they’re out and about, at their most alert and open to influence. Greater Manchester’s Metrolink tram wrap provides an exciting new canvas for us to showcase our future-facing brand and we’re delighted to be the first commercial partner.”

Jason Cotterrell, Managing Director at Exterion Media UK, said: “Set in the heart of one of the UK’s largest cities, this is a truly impactful OOH proposition that offers extended level engagement and increased brand awareness for advertisers. The Metrolink tram wrap offers advertisers a new creative platform to target the diverse and influential audiences in Greater Manchester and we are thrilled that such an innovative brand as KAYAK is capitalising on this opportunity.”

Peter Cushing, Transport for Greater Manchester’s Metrolink Director, said: “The Metrolink network currently covers 57.5 miles and 92 stops across seven lines in Greater Manchester, while hosting 32 million passenger journeys a year. This makes campaigns such as this an ideal way to connect with local audiences in the heart of their communities.”

Part of a wider OOH campaign with Exterion Media, KAYAK has also deployed a mix of traditional and Digital Out-of-Home (DOOH) assets across the London Underground.

KAYAK is an independently managed subsidiary of The Priceline Group and allows users to search and find flights, hotels, rental cars and vacation packages.