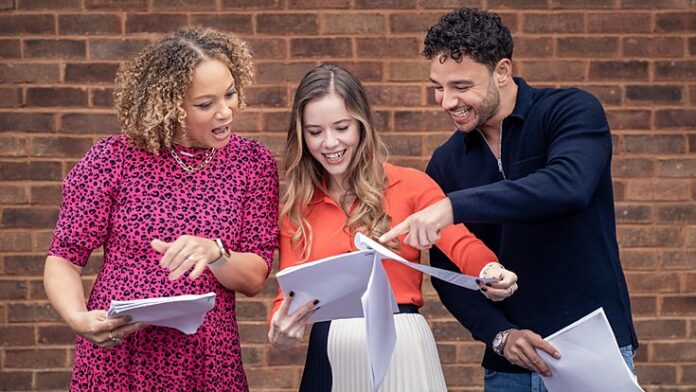 Following the announcement of Waterloo Road’s return to the BBC for a brand-new series later this year, the return of three hugely popular cast members has been confirmed.

Angela Griffin is back as Kim Campbell and is now Headteacher of the school, Adam Thomas is returning as Donte Charles and Katie Griffiths is returning as Chlo Charles. Images of the trio on set ahead of filming commencing have also been released.

The three actors excitedly reunited for the first time after years apart as they begin to prepare for filming. The award-winning contemporary drama series, which is set to return to BBC One and BBC iPlayer later this year, will start shooting on location in Greater Manchester next month

Angela Griffin, who will reprise her role of Kim Campbell, says: “I feel really honoured to be joining the new series of Waterloo Road. It is exciting to be stepping back into Kim’s shoes and I can’t wait to explore her life, character and how she has evolved since we last met her. The writers have some amazing storylines planned and I’m looking forward to welcoming viewers back to Waterloo Road.”

Adam Thomas, who returns as Donte Charles, says: “I’m so excited to go back to where it all started! Waterloo Road was a huge part of my life and career so to go back 15 years later is a dream come true. I feel so blessed to have been given this opportunity to get back to acting and doing what I love! I can’t wait to see some old faces and some new. I know this series is going to be the best one yet…”

Katie Griffiths, who plays Chlo Charles says: “I am incredibly excited to be returning to Waterloo Road – loved by all who make and watch it! Chlo was my first professional acting role, and I feel so lucky to be part of the show again. I can’t wait to see what stories unfold!”

Originally airing on the BBC from 2006 to 2015, Waterloo Road was one of the UK’s most popular and longest-running TV dramas, with an impressive alumni of dynamic characters and award-winning storylines. Such is the show’s enduring popularity, it has drawn both loyal and new, young and diverse audiences since it dropped as a boxset on BBC iPlayer in September 2019, and last month ranked among the top ten most watched shows on iPlayer in 2021.

The new series of Waterloo Road will use its rich history of telling entertaining and gripping human stories while tackling the important issues of the day. The new series is set and made in Greater Manchester and produced by award-winning Wall To Wall in co-production with Rope Ladder Fiction, the new Manchester-based label from Cameron Roach, who executive produced the previous series of Waterloo Road in both Rochdale and Greenock.